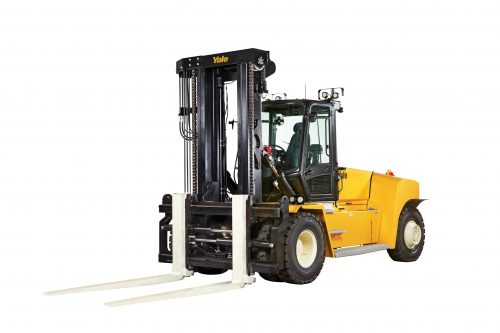 Adding to its already diverse portfolio of trucks, Yale Europe Materials Handling unveiled its highest capacity truck to date – the GDP160EC12 – to customers, dealers, and journalists at its exclusive ‘This is Yale’ event held in Germany.

The latest edition to the Yale® EC Series, the new model is capable of lifting 16 tonnes at a 1200mm load centre, allowing cumbersome and odd-sized loads to be carried more effectively. The new high capacity truck transports Yale into a new range of handling applications where a longer load centre is required.

“Yale is very proud to add the GDP160EC12 to its growing range of material handling equipment,” said David Reeve, Wood Industry Manager for Yale. “Based on feedback from customers and dealers, every design element of this truck has been carefully considered to ensure it achieves maximum dependability in the most demanding applications. The capacity of the truck allows it to deliver outstanding performance when handling lumber, steel, concrete and other heavy loads.”

Designed to operate in a wide range of industries and applications, Yale chose to demonstrate the truck’s wood handling capability on its first public showing at This is Yale in September. Yale industry experts highlighted its superior cooling properties, operator ergonomics, excellent manoeuvrability, and ease of service as some of the key features underpinning its ability to withstand the harsh operating environment associated with the wood industry.

Building upon the well-established 8-16 tonne Yale EC Series, the GDP160EC12 builds on the core characteristics that make these trucks so robust in the most arduous applications. The GDP160EC12 benefits from the latest operator visibility updates and increased range of carriage options recently announced for the series.

Thanks to the narrow profile of the front axle, the load centre line distance can be enhanced allowing the carriage to be mounted as close as possible to the drive wheels. This has created space for a heavy duty mast while avoiding an increase in load face distance.

A large curved front window and wide rear windows contribute further towards optimising operator ergonomics. When lifting heavy and awkward loads, such as wood, the excellent visibility offered by the GDP160EC12 is of paramount importance for effective operation.

The Yale EC Series comes with 2440mm integral forks for optimised capacity and visibility as standard and an extended range of pin or hook type carriages are available, allowing the truck to be customised to meet the needs of specific applications.

“The GDP160EC12 is both durable and versatile, making it an excellent extension of the Yale high capacity truck range. The 1200mm load centre, carriage range and optimised operator visibility are testament to the ergonomic values that run throughout the entire range of Yale equipment,” concludes David.

Many external factors affecting materials handling operations in the chemical supply chain are not immediately obvious. Mark Nailer, Industry Manager for Hyster Europe discusses some of the... END_OF_DOCUMENT_TOKEN_TO_BE_REPLACED

In the coldest and least populated region of Norway, CASE Construction Equipment customers fight the elements to keep the roads clear of snow. In the counties of Finnmark and Troms in the Arctic Circle, CASE G-series wheel loaders are starting work to keep the region moving through the winter... END_OF_DOCUMENT_TOKEN_TO_BE_REPLACED