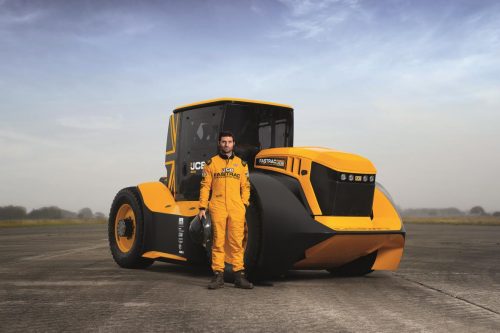 Williams Advanced Engineering has worked as an important part of a project team to support JCB’s World Record attempt to build the World’s Fastest tractor.

Using its expertise in aerodynamics, Williams Advanced Engineering’s brief was to maximise the aerodynamic performance of the tractor, without compromising the integral shape of the vehicle.

Taking the standard JCB Fastrac tractor, the team analysed four key areas which together, delivered the biggest reduction in drag and largest gain. In addition to adding an “aero” bumper, a flat underfloor was incorporated to ensure smoother airflow under the vehicle. Mirrors were removed from the cab and the front overhang reduced. The rear farings were adapted to close the wake behind the cab and further modifications made to ensure only clean air was being drawn into the turbo inlets.

In all, Williams Advanced Engineering ran more than 65 individual Computational Fluid Dynamics (CFD) simulations. The result was a reduction in drag of 25 per cent over the standard Fastrac tractor and, in the hands of motorbike racer, lorry mechanic and TV presenter Guy Martin, the vehicle went on to hit 153.771mph with an average speed of 135.191mph at Elvington Airfield securing the Guinness record for the World’s Fastest Tractor which featured on a Channel 4 documentary on Sunday 17 November called “The World’s Fastest Tractor”.

Ian Turner, Head of Aerodynamics at Williams Advanced Engineering, said: “This has been a challenging and fascinating project, one that really showcases the effect that aerodynamic optimisation can have on speed and the versatility of CFD applications. In this instance, we’ve been able to bring learnings from race car design to an agricultural vehicle and in doing so, have been able to realise significant aerodynamic improvements. We are proud to have played an integral role in the project and would like to offer our huge congratulations to the team at JCB and partner companies for breaking the world speed record for a tractor.”

Rushlift GSE, the specialist airport ground support equipment subsidiary of Doosan Industrial Vehicles UK, has won a £3.4 million contract to supply and maintain a fleet of 225 vehicles for ASC... END_OF_DOCUMENT_TOKEN_TO_BE_REPLACED