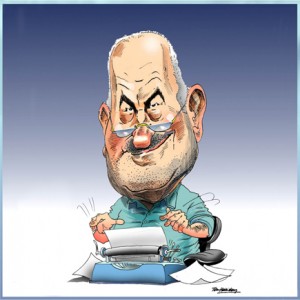 Graham Archer knows people need to eat. “But why all at the same time?” he asks. “Surely it would not extend the human imagination too much to ensure that all units remain functioning during lunchtime.”

I had occasion recently to visit a hardware outlet in the Drogheda area. I wanted to buy an electric hedge clippers.

It was a quiet afternoon and the store was relatively peaceful. Baffled by the choice of items on display, it was clear I needed help if I was to distinguish one from another. With many stored in boxes, I especially needed help so that I could hold what it was I wanted to buy.

But, could I find anyone to assist me? Unfortunately not. The girl at the desk said that staff from that section were on their lunch break. It was 4pm.

You can imagine the thoughts that were racing through my mind – not least the one about hardly a day going by but we hear about some retail chain or another that has gone out of business and whose staff had lost their jobs.

Yet, there I was, standing in one that I am convinced will close, if it has not already done so. On that day, an amount greater than €100 was let leave the store without anyone being there to take it from me.

I have always been baffled by this concept of a lunch break. In many provincial towns, it is common for stores to close completely while everyone goes off to lunch, though habits may have changed since the cold wind of recession came blowing down its streets.

Don’t think that Graham Archer is an uncaring person. People do need to eat. But, do we all have to eat at the same time? Surely it would not extend the human imagination too much to come up with a plan that would ensure that all units remain fully functioning whilst everyone has their food.

In the case of my friends in Drogheda, I communicated this view to the girl on the information desk. I told her that, by being off-duty when someone was there to do business, staff were not jeopardizing my future. On the contrary, it was their own futures that they were putting on the line. She seemed little interested. I was wasting my sweetness on the desert air.

If there is a moral in my story, surely it is that managers are errant in their duty if they fail to put across to staff the importance of their role in the wider scheme of things. Employees are intelligent people. They should be encouraged to have ‘ownership’ in the success of their businesses and encouraged to come forward with suggestions that will secure their jobs and make the companies they work for stronger. Staff should know that nobody should ever be allowed leave a store because there was no one there to serve them.

Everyone has a value and each person should know what that value is. Recruit well and, through training and one-to-one instruction, stimulate those around you. Show them how important they are in the economic chain. Disavow them of the notion that their future depends only on the decisions taken by management. Involve them. Fire their imaginations. Seek their suggestions and ideas. Above all, point out the wider context of their work – and the contribution they can make in protecting their own jobs.

Today, too many owners seem focused on the objective of squeezing as much return as possible from their businesses whilst operating a lean machine.

One contrasts this with those successful companies of years ago, companies that are part of Irish industrial legend. Companies who provided in-house medical services for everyone and who built swimming pools and playing pitches for their staff to enjoy after hours.

Returning to my friends in Drogheda, you might well ask if it would have been a simple thing to stagger lunchtime hours so no section was left unmanned? Of course it would. But that is not the fault of staff. That responsibility rested on the boss’ desk. I did ask, but he wasn’t available either. And thereby hangs a tale!

The Mercedes-Benz Global Logistics Center Germersheim is celebrating its 30th  anniversary this year and the inauguration of a new, state-of the-art warehouse complex. The After-Sales location began... END_OF_DOCUMENT_TOKEN_TO_BE_REPLACED

Combilift, the Monaghan based manufacturer of a wide range of handling solutions, first focussed its attention on the container sector in 2010 when it launched its Combi-SC Straddle Carrier range. It has since developed a number of variants of this economical and flexible alternative to other heavy... END_OF_DOCUMENT_TOKEN_TO_BE_REPLACED