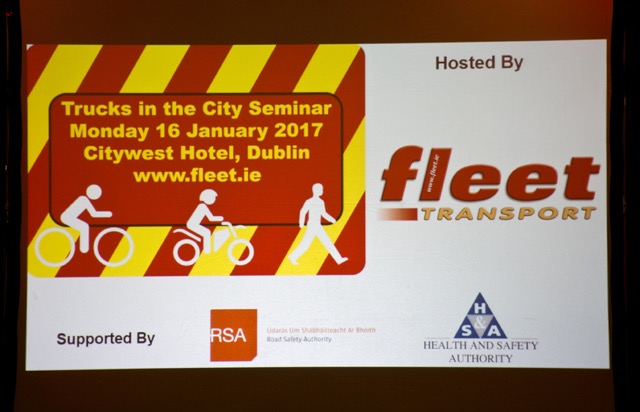 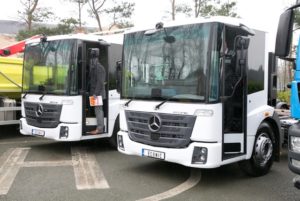 A seminar aimed at highlighting the issue of road safety between trucks and cyclists / pedestrians raised interesting discussions and positive responses towards creating programmes to protect vulnerable road users in the urban environment in Ireland.

The event at Citywest Hotel in Dublin was hosted by Fleet Transport in association with the Road Safety Authority (RSA) and Health & Safety Authority (HSA). Chaired by Superintendent Con O’Donohue from the Garda National Roads Policy Bureau, over 180 delegates representing all areas of the transport industry, as well as cycling organisation representatives, heard from a selection of leading experts and best practice advocates on how to address this topical issue.

Outside the hotel, an impressive line-up of trucks and vans featured many of the latest safety features and technologies specifically targeted at improving road safety between vehicles and other road users.

The figures for accidents involving vulnerable road users and trucks are quite stark. Reviewing statistics from 2008 to 2011, Professor Anne Drummond from the Centre for Safety & Health at Work at UCD revealed that out of a total of 915 road traffic fatalities in this period, 193 involved a worker, work activity, or work process. Of these 193, a truck driver was involved in 99 cases. In at least 37% of these 99 cases the deceased was either a pedestrian or a cyclist. Blind spot incidents accounted for nearly three quarters of fatalities involving non-workers. She added that a lot of people continued to not be aware of work related safety, and her message was the need to continue doing what we’re doing, but to do it better.

London has been to the fore in promoting measures to protect vulnerable road users through the adoption of the Construction Logistics and Community Safety (CLOCS) programme, and Vicky Simms, Project Manager for Transport for London outlined what the initiative aimed to achieve. “The structured programme had clear objectives – improve vehicle safety through manufacturer and design, address health and safety issues on construction sites and encourage best practice throughout the logistics industry. On vehicle specification, the onus was on maximising driver direct vision,” she explained. Over 20,000 trucks have been fitted with enhanced safety features to date, and Vicky described reaction from the truck manufacturers as ‘encouragingly positive’.

Seen as an ideal partner to CLOCS is FORS – the Fleet Operator Recognition System. Peter Morrow, FORS Manager for Northern Ireland explained how the accreditation system worked and how it can benefit members from safety, efficiency and environmental protection perspectives. Launched in 2007, FORS now boasts over 4,350 members, 79% based outside London. Of these over 600 have earned Silver accreditation and over 180 have Gold accreditation representing operational excellence.

As a leading London-based waste management company, O’Donovan Waste Disposal – which has strong Irish connections – has fully embraced the CLOCS initiative. Jacqueline O’Donovan said they wanted to change the culture and perception of the industry, and highlighted both the operational processes, as well as the many beneficial aspects to becoming one of the first CLOCS champions, as well as being a keen FORS advocate. Higher staff retention, fewer incidents, and better fuel economy and lower CO2 emissions were just some of the plusses she highlighted.

Getting the support of the industry will be crucial for the success of any initiative, and Tom Parlon, CEO of the Construction Industry Federation was broadly supportive of steps that could be taken to reduce and eliminate incidents involving vulnerable road users. He highlighted many of the steps the industry has already taken to improve safety, particularly on-site, and in noting that it was timely to have these discussions, added that all road users and leaders involved in transport needed to drive the safety agenda.

In her concluding address, RSA CEO Moyagh Murdock said that there now exists a great opportunity following on from the seminar to highlight the risks and safety aspects of heavy road vehicles. She added that there was a need to foster a culture where incidents are reported without fear of punishments, and called on organisations to commit financial and human resources to address safety.

A full review of the ‘Trucks in the City’ Safety Seminar is featured in the forthcoming issue of Fleet Transport.

As part of the product launch process and to get customer feedback, the new Terberg fully electric Body Carrier was operated by Nap Transport at the DPD parcels site in Veenendaal in the Netherlands... END_OF_DOCUMENT_TOKEN_TO_BE_REPLACED

As part of the product launch process and to get customer feedback, the new Terberg fully electric Body Carrier was operated by Nap Transport at the DPD parcels site in Veenendaal in the Netherlands for several months early in 2020. Director Arjan Nap: “We were very pleased with the electric... END_OF_DOCUMENT_TOKEN_TO_BE_REPLACED