The VW Caddy…thirty years on 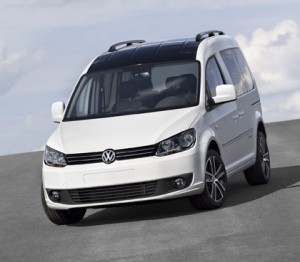 Volkswagen Commercial Vehicles wasn’t willing to wait until next year to mark the 30th birthday of its Caddy van…so visitors to the IAA show at Frankfurt in September were treated to the launch of a special sporty anniversary edition of the vehicle.

Although termed a ‘concept vehicle’, apparently the production ‘Special Edition Caddy 30’ version will almost identical to the one on display in Frankfurt. That one sported a brilliant gloss black roof with rails, machine-polished 17-inch alloy wheels, a high-end interior and a powerful and torque-strong engine.

When first launched on the European market in 1982, the Caddy was offered as a pick-up based on the Golf Mk1. Now, 30 years later and with over 1.5 million units sold to date, the Caddy is an established player in the compact and urban delivery van market.

Five bodywork colours will be available, with buyers having a choice of Candy White, Reflex Silver, Salsa Red, Primavera Green or Sunny Yellow – all designed to go well with the black roof. The interior, in either five-seat or seven-seat configuration, has a sporty, high quality design, with seats in Alcantara upholstery, multi-function steering wheel, leather-trimmed gear stick and handbrake lever, semi-automatic climate control and tinted windows combining to create a pleasant ambience.

The special edition model is available with four different engine specifications: as a diesel (TDI) producing 75 to 125 kW and as a petrol (TSI) version with 77 kW – both with a short wheelbase as a car or as a panel van for commercial use. Details of price and availability will be announced later.

TRACKING IRISH RAILFREIGHT Sprinter to the rescue at motorsports

Hermes UK, the leading consumer delivery company, has launched an innovative new service designed to further improve the ‘returns experience’ for its retail customers and their consumers. It... END_OF_DOCUMENT_TOKEN_TO_BE_REPLACED

Hermes UK, the leading consumer delivery company, has launched an innovative new service designed to further improve the ‘returns experience’ for its retail customers and their consumers. It follows a successful trial by fashion retailer, Joe Browns. The ‘What’s inside the box?” service... END_OF_DOCUMENT_TOKEN_TO_BE_REPLACED