The Combi-CB…a step up for Richard Burbidge Leading supplier of timber stair kits Richard Burbidge – whose products are well-known on the Irish market – has taken delivery of a Monaghan-built Combi-CB 4-way forklift.

The compact Combilift model has already contributed to a much more efficient use of storage space in the company’s timber parts warehouse, as well as speeding up materials handling procedures at the company’s manufacturing facility in Shropshire.

Richard Burbidge was an early convert to the Combilift 4-way system. For some time, the company has been using two Combilift ‘core’ C4000 trucks to offload and handle heavy raw materials such as packs of timber. However, more recently the company found it also needed a truck that could handle a mix of pallets and long loads, as well as feed lines in the production facility when necessary.

Manufacturing engineer Mark Chorlton and his team evaluated a wide range of options, including articulated trucks and other electric 4-way brands, before settling on the 2.5-tonne capacity Combi-CB recommended by Abex Ltd, Combilift’s local official distributor. “Together with its counterbalance design, the CB’s versatility to work indoors and outside was very attractive,“ says Mark. “The video on the Combilift website clearly demonstrated its extreme manoeuvrability.”

In consultation with Abex and the Richard Burbidge team, Combilift design engineers in Monaghan supplied numerous layout diagrams. This three-way collaboration resulted in a CB version tailored to Richard Burbidge’s exact requirements – specifically to work in a racking configuration designed for the optimum use of all available space in the warehouse. The diesel-powered machine has side-shift as standard, and, to cope with the limited headroom, is equipped with a 4.9m triplex full-free lift mast.

The customer also opted to have a hydraulic fork positioner fitted, one of a number of attachment options offered by Combilift. This allows for quick hydraulic adjustments of the forks to fit varying sizes of loads – such as pallets, 8ft long stillages and packs of board. Driver Paul Bebbington: “as the fork positioners can be operated from inside the cab we don’t need to keep getting on and off the truck; this is a real time saver.”

“Turning on a Sixpence”

Picking and storing product has been further speeded up by the CB’s ability to turn on its own axis: once in the aisle, the driver can move loads from one side of the racking to another by turning 180º, eliminating time-consuming travel in and out of the racking. “The truck’s capability to ‘turn on a sixpence’ as well as its ability to access floor level storage has boosted productivity at our busy site,” says Mark. “The drivers also appreciate its easy operation, the roomy cab and good visibility. In short, the Combi-CB has become an integral part of our operations and now we’d be stuck without it.” 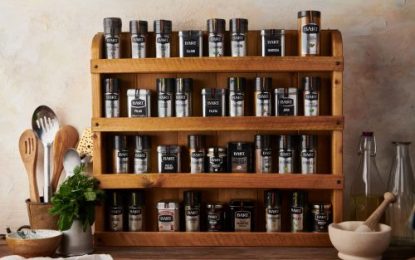 Palletways Bristol has been awarded a spicy new contract Bart Ingredients which sees the haulier take responsibility for all the manufacturer’s palletised freight distribution in the UK. Palletways... END_OF_DOCUMENT_TOKEN_TO_BE_REPLACED

TX Logistik AG (Mercitalia Group) has now presented the third generation of its NiKRASA technology. The solution, which also allows non-craneable semi-trailers to be easily loaded onto rail, has been improved once again and successfully tested in advance in rail and terminal operations. The newly... END_OF_DOCUMENT_TOKEN_TO_BE_REPLACED