THE BLAME GAME …can we please change the rules? 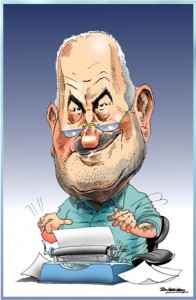 How often have we seen people bury their heads in the sand rather than face the truth of a situation, asks Graham Archer. Personal responsibility has to play a part, he says. “But we don’t want to know that, do we?”

I never cease to be amazed at the degree to which we Irish can become detached from reality.

In numerous different ways, one comes across examples of this. One recent and rather tragic case involved a young lady who mourned the loss of a loved one whose life was prematurely ended after he had over imbibed in the dreaded falling down water. Interviewed on television, the young lady blamed his unfortunate death on the fact that there is far too much low-cost liquor sold in shops these days.

That is true. She was right. There is far too much cheap booze. But is it fair to blame shopkeepers if young people insist on drinking themselves into the next world? Of course not! Personal responsibility has to play a part. But we don’t want to know that, do we?

Recently, our poor Minister of Finance brought the house down around his ears for daring to suggest that many of those who are leaving for Australia and elsewhere are going for lifestyle reasons. In a flash, we hit the denial button. How dare he slander our emigrants like that. And as we bellowed our rage, we blithely forgot that that is exactly what thousands of our graduates did when the Celtic Tiger was at its height.

During that period, parents drove to the airport in their thousands to wave their kids goodbye as they backpacked off on their right of passage flights to Ayres Rock, the Great Barrier Reef and God knows how many doss houses in between. Now, of course, it has become treason to suggest that those self same graduates might still be leaving Ireland for lifestyle reasons.

Then we had the Taoiseach’s unguarded utterance: “people went mad borrowing”, made during his visit to Davos. Like Minister Noonan, he too had to be put on the national spit for daring to attribute such blame.

When the property market was at its height and prices were raging out of control, I remember urging my son to stir himself and look at properties. The intention was that he should get himself on to the ladder before houses became even more expensive than they then were.

Gripped by a mild panic, we went to view a house on a new estate in Lusk. It was teeming with anxious young buyers, most of them accompanied by the parents who would eventually guarantee their loans. Charged with showing off the properties were two young females, both in their early ‘20s. Not the experienced agents one would expect.

“How many have you yet to sell?” I tentatively enquired. “Three…and you’d better put your name down quickly because they could all sell today,” she replied.

Feeling a little pressurised, I asked to see a site map. “I’d like to see the three houses – and check there are no manhole covers in the front garden.” They hadn’t a clue what I was talking about.

Naturally, we didn’t buy. But, as we left, I could not shake off the feeling that, in that pressurised situation, three suckers would commit to buy the last three houses. They would pay a small fortune for a rather average house on an estate where the agent didn’t even have a map on which they could see where the house they were being asked to buy was situated. That’s how mad we were.

Was the Taoiseach right to say we went mad borrowing? You bet he was! But that didn’t stop us dumping on him for having the temerity to hold a mirror up to our reckless behaviour.

For years, we suffered under leaders who wouldn’t know the truth if it came up and kissed them. As for speaking the truth, when was the last time we had a leader whose word we could trust?

Today we have leaders prepared to tell it as it is – yet when they do, all hell breaks loose. They’re pilloried on all sides.

“You can’t handle the truth,” roared Jack Nicholson’s character in the film ‘A Few Good Men’. One would wonder if we don’t suffer from the same condition?

As part of the product launch process and to get customer feedback, the new Terberg fully electric Body Carrier was operated by Nap Transport at the DPD parcels site in Veenendaal in the Netherlands... END_OF_DOCUMENT_TOKEN_TO_BE_REPLACED

One of the most popular new items in BITO’s recently launched online BITO Direct catalogue is the company’s Galvanised Boltless Shelving, which can hold a combination of BITO’s XL and RK containers for bulk and small parts to suit the different purposes a company may have. The shelves can be... END_OF_DOCUMENT_TOKEN_TO_BE_REPLACED