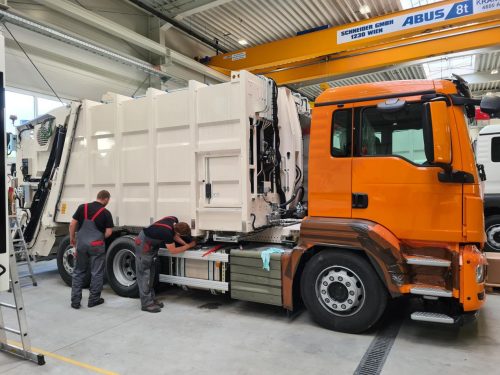 The Civil Engineering Department of the Swiss city of Thun has added three new three-axle MAN TGS chassis to its waste collection fleet. The trucks, which went into service in August 2020, are MAN TGS 26.430 6×2-4 with steered trailing axle and fully electric Medium XLS onboard refuse compaction system by Stummer. They are powered by the brand new MAN D26 Euro 6d engine with 12.4 litre displacement and 316 kW, coupled with Allison’s 4000 SeriesTM transmission with a retarder.

The city of Thun was looking for vehicles that combine the smooth and jolt-free starting performance of fully electric trucks with the reliability and economy of diesel vehicles. According to Toni Zimmermann, Head of Procurement and Safety for the City of Thun, this vehicle configuration of Euro 6d engine, together with Allison fully automatic transmission and electric refuse body, is currently unique.

“We previously had vehicles with automated manual transmissions (AMT), but this did not quite meet our expectations. The jolting during stop-and-go operation is an enormous strain for our drivers, but especially for the loading crew at the rear of the vehicle. We wanted to use fully automatic transmissions to come as close as possible to achieving the same smooth running of transmissions as in electric vehicles,” said Zimmermann. “There is no jolting of gears in electric vehicles and this is a huge advantage for our employees working on the vehicles, as well as for the driver.”

The 26-ton rear loaders, operated by three people – one driver and two loading crew – collect rubbish from around 21,000 households in Thun. Alternating between collecting household waste, bulky goods, paper/cardboard and green waste, they cover some 9,320 miles a year and operate around 1,500 hours.

Thun considers itself a pioneer in the field of innovative, environmentally-friendly vehicles, and strives to stay one-step ahead in terms of technology. One example is the fully electric Futuricum refuse vehicle on a Volvo chassis, which has been operating successfully in Thun since 2018. The high procurement cost and the relatively short experience with this vehicle prompted the city to take the intermediate step of a hybrid system.

The Allison 4000 Series TM, with its patented torque converter and continuous power shifting, provides the perfect features required for the city’s challenging topography and its 600 metre altitude difference. The torque converter smoothly multiplies engine torque delivering more power to the wheels to improve vehicle start-up and enable more responsive acceleration. Furthermore, it protects the entire powertrain from vibrations and jolts during gear shifting. The precise crawling speed and precision tuning facilitate the collection of garbage bins in narrow alleyways, as well as working at extremely low speeds. Allison fully automatic transmissions provide seamless, uninterrupted power for increased average speed, higher productivity and driving comfort – even on steep inclines such as in the city of Thun.

“The smooth, jolt-free vehicle startability of the Allison transmission torque converter is highly beneficial to the employees on the running boards – the so-called loaders. Moreover, the drivers are fully satisfied with Allison’s fully automatic transmission due to the excellent driving comfort,” said Zimmermann.

To ensure that the lithium iron phosphate batteries operating the compaction system are fully charged every morning, the MAN TGS are hooked up to the charging station at night and the refuse collection body is recharged. The additional weight of the battery packs and accessories is approximately 1,020 kilograms. The charging capacity is 54 kWh and the effective working life of the battery is around 2,000 charging cycles.

In the event of an emergency, the vehicles have a second pump so that the body functions can be operated via the power take-off of the Allison transmission.

Alongside the most advanced safety features, the vehicles also offer a number of Swiss in-house developments that are very practical in wintery conditions on ice and snow:

A heating system was installed to heat the handles for the loading crew at the rear of the refuse vehicle.
A drawer above the exhaust has been designed as a dryer for wet gloves. This is heated by the warmth of the exhaust.

Furthermore, the new refuse collection vehicles of the city of Thun are equipped with a suction device at the rear of the vehicle. This “Clean-Option” feature offered by bodybuilder Stummer Kommunalfahrzeuge, protects loading personnel and residents from exposure to bioaerosols (dust, mold, viruses, bacteria) that can occur in varying concentrations in all types of waste, thus reducing the risk of eye irritation and respiratory diseases.

“Today’s modern vehicles must also be good workplaces for employees. I believe we have made an excellent choice with the new vehicles,” said Zimmermann.

Peak-Ryzex – a provider of digital supply chain, mobile workforce and retail solutions – continues to support organisations operating in transport & logistics and the supply chain with a... END_OF_DOCUMENT_TOKEN_TO_BE_REPLACED

Peak-Ryzex – a provider of digital supply chain, mobile workforce and retail solutions – continues to support organisations operating in transport & logistics and the supply chain with a recent solution rolled out for two-man home delivery provider, Breezemount. With this new solution... END_OF_DOCUMENT_TOKEN_TO_BE_REPLACED