by Howard Knott as featured in Fleet Transport Sept-Oct edition

On 16 August, the Ballina/Dublin container rail service operated by Irish Rail on behalf of Forwarder IWT, returned to a five-times weekly in each direction schedule. The congestion issues at Dublin Port that had led to a temporary suspension of the long-established service have been side-stepped by the introduction of a later evening shift at the Port’s Common User terminal.

XPO Logistics will now introduce its Ballina-Waterford container rail service in Week 40 (the end of September). General Manager, Kelvin Bulmer, advises that traffic commitments for the new service are already more than sufficient to meet the initial one train a week schedule. Samskip has enhanced its service through Waterford Port, initially adding a weekly Amsterdam call to the twice weekly Rotterdam service and now adding a Rotterdam call to the Amsterdam service.

Jerry Hallissey, Head of Business Development at Shannon Foynes Port says that the company is optimistic about the development shortly of the planned road and rail links to the European Core Port of Foynes. The company has recently been awarded a grant of €2.3 million under the European Connecting Europe Facility (CEF). The co-funding will support a feasibility study to prepare for the development of a further deep-water berth and associated infrastructure at the port.

The Timber Packaging & Pallet Confederation (TIMCON) has asked government to confirm it will act to keep the pallet and packaging business operational in the event of any planned power outages... END_OF_DOCUMENT_TOKEN_TO_BE_REPLACED 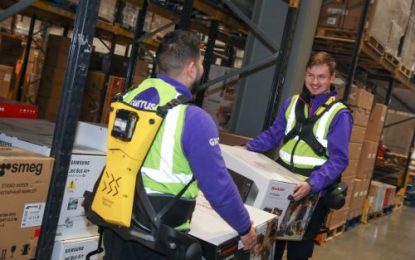 Currys, a leading tech retailer, has revealed it has invested over £250,000 in a fleet of robotic exoskeleton suits to help colleagues from logistics partner, GXO, work safely and efficiently through the busy festive period. The suits, which are being used at Currys’ state-of-the-art facility in... END_OF_DOCUMENT_TOKEN_TO_BE_REPLACED