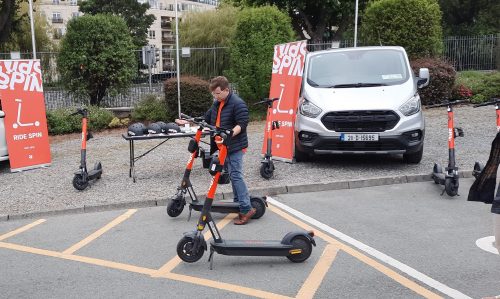 Ahead of legislation passing to legalise the use of e-scooters by the Dáil later this year, Spin, the Ford-owned micromobility company, hosted an e-Scooter Safety Demonstration event at the RDS in Dublin.  More than 20 members of the media, public representatives and public and private bodies interested in road safety experienced Spin’s cutting-edge technology for the first time in Ireland.

In preparation for launching operations in Ireland, the company has been engaging with local and national bodies that have an interest in how micromobility, and specifically Spin’s operational excellence can help to improve the lives of commuters and city dwellers and ultimately benefiting the wider economy across Ireland.  This e-Scooter Safety Demonstration event is a part of that wider outreach aimed at educating people in Ireland about the benefits of micromobility and Spin’s capabilities that could be available in Ireland.

Headquartered in San Francisco, Spin has a broad range of experience in running e-scooter and e-bike programmes across North America, the UK and mainland Europe.  Moreover, it has pioneered and implemented several tech-enabled safety solutions that address cities’ biggest concerns. As seen at the demo event, Spins Insight Level 2 powered by Drover AI uses computer vision to detect footpath riding in real time which not only helps e-scooter riders learn more responsible behaviour but also ensures a safer environment for pedestrians. The innovative tech also encourages good parking behaviour by giving out signals for appropriate and improper parking.

Steve Pyer, UK & Ireland Country Manager at  Spin , said: “E-scooter and e-bike hire schemes  can bring such great benefits for Cities and communities across Ireland given the size and evolution of the country’s city and town infrastructure. Many urban locations in Ireland have grown from medieval town structures, not very well suited for the mass movement of modern traffic”.

“In implementing new micromobility services, the great opportunity for Ireland is that it can now take the learnings from other government-led trials held in towns and cities , such as those in the UK and from the global operational expertise of service providers like Spin  It is true that in some cities, e-scooters as a mode of transport have attracted some negative connotations mainly thanks to the implementation of early programmes that were not designed to complement and integrate with existing infrastructures.  In addition, advances in safety technology, many of them introduced by Spin, are helping to promote responsible e-scooter use that respects all other road users”.

Some of these latest technologies were showcased as part of the Spin e-Scooter Safety Demonstration event including geo-fencing which, using GPS tracking, forces scooters to reduce speed in designated areas such as near schools, and can prevent scooters from operating in pedestrianised areas.  For example, Grafton Street in Dublin would be designated as a no-go ‘geo-fenced’ area for Spin e-scooters, units will power off automatically if a rider tries to enter this or any other geo-fenced street or area.

Spin also employs GPS to reduce the incidence of e-scooter users riding scooters on the footpath.  By using GPS, Spin controllers can tell if a user is riding on a footpath. Such offenders are sent a warning and if they persist, their access to Spin e-scooters is suspended.

Dangerous and irresponsible parking of e-scooters is another bugbear of other road users and even with this seemingly intractable problem, the Spin team was able to show how the latest technology is providing a solution.  Spin technicians demonstrated the latest ‘Tortoise’ technology that employs remote control systems to solve this misuse of e-scooters.  Irresponsibly parked units will be flagged on the GPS system and a central controller will be able to remotely control the scooter and move it to a safe or designated parking area.

Spin is committed to become Ireland’s most trusted micromobility company, when legislation allows. As part of this Spin has also announced that it will be working with its experienced local partner in Ireland, An Rothar Nua (ARN) to establish e-bikes and e-scooter programmes across Ireland featuring its latest safety technologies.  By bringing the latest e-scooter models to Ireland, Spin ensures that Irish cities and towns will receive the best-in-class technology from the start.  Spin has both the technological solutions and extensive experience in working with cities across the globe and can bring all the benefit of that global experience to bear when developing specially tailored programmes for towns and cities across the island of Ireland.

Spin brings a wealth of experience with government-led trial schemes, for example, working with the UK’s Department for Transport  and local authorities  operating public-hire e-scooter programmes in seven locations.   Since their launch a year ago , more than 500,000 rides have been made by Spin riders. Recent rider survey has shown that there is a clear modeshift and behaviour change as  the majority (82%) of riders said that they have used e-scooters for short journeys instead of driving alone in a car at least once already. This ultimately shows the potential of reducing the number of cars on the road in high traffic areas and decreasing carbon emissions.

John Dye, President of the Timber Packaging & Pallet Association (TIMCON) has commended the increasing trend for wood-based organisations representing different parts of the industry to work closer together, with the shared goals of tackling challenges and improving the position of the sector... END_OF_DOCUMENT_TOKEN_TO_BE_REPLACED