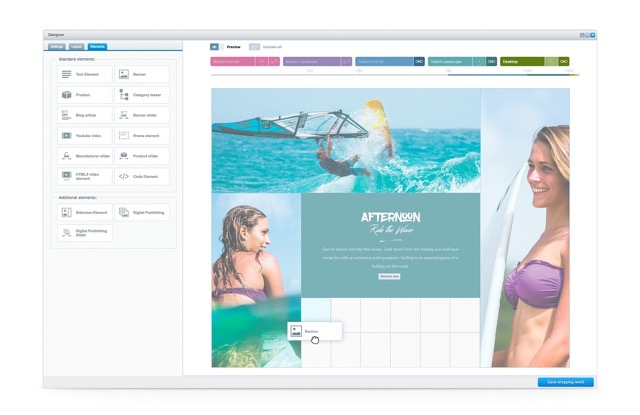 Schöppingen, Germany 20th May 2016 – When Shopware refined their brand identity at the beginning of the New Year, three core values came to define the company’s guiding philosophy: open, authentic, visionary. On Friday, 20th May, these principles were honored in every regard at the software manufacturer’s in-house exhibition, the Shopware Community Day. Now six years running, the Community Day has become regarded as one of the most important eCommerce events in central Europe. This year, a record-breaking 1,600 visitors – including merchants, partners, developers and eCommerce enthusiasts – came together in Ahaus, Germany, to gather valuable industry insight. Next to the 40 exhibitors and 60 presentations, visitors also experienced the highly anticipated keynote from Stefan Hamann, which introduced the latest Shopware developments, including the forthcoming release, Shopware 5.2.

This year, Shopware united the Community under the motto “Digital Blue” – a theme which suites eCommerce particularly well, as illustrated by Shopware CEO Stefan Hamann in his opening keynote: “Digital Blue is a metaphor for our industry’s extensive and diverse digital ocean; a majority of which remains unexplored. And eCommerce follows the same laws of nature that govern the depths of the ocean: hunt or be hunted, thrive and reproduce, protect your own kind and be able to react to your environment.”

Diving into the digital blue and inaugurating the event, the 60-minute keynote presented Shopware’s vision for the future of eCommerce and outlined the impressive plans the company will use to navigate the open seas ahead. “We conduct fundamental research and development for topics still considered experimental – of course, the objective being to later incorporate our findings into our products. These include approaches to shopping for virtual reality (VR), the internet of things (IoT) and other themes that focus on the future of retail. These concepts have an ongoing role in our deign thinking approach and strike a particular chord with our Community, as seen in our Shopware Insider Program.”

The Community was able to experience this research first-hand in the “Deep Sea Labs”, where they were free to test future-oriented devices, such as the HTC Vive and Oculus Rift consumer version. Outside the event, additional forums are used to encourage the open transfer of knowledge with the Community. These include regularly held Think Tanks and an annual external hackathon. The company also emphasises transparent development by offering their complete source code on the social coding platform, GitHub.

During the event, Shopware repeatedly placed the ideas surrounding open source development in the foreground and emphasised its highly instrumental role in the forthcoming version 5.2. Taking feedback directly from the Community, Stefan Hamann presented the latest features to benefit merchants, developers and end customers alike. These include improved Shopping Worlds, a new address management and a revised plugin system. Expanding Shopware’s functional range even further, it was also announced that as of Shopware 5.2, the powerful enterprise resource planning system, Pickware, would available free of charge and already integrated into the default Professional and Professional Plus editions.

A truly surprising moment came when Shopware announced that as of Shopware 5.2, they would be eliminating the use of the encryption software ionCube. Previously, the source code of Shopware’s Premium Plugins was encrypted using ionCube, making it impossible to make any adjustments to the plugin itself. By unencrypting the plugins, every line of code can be viewed, thereby offering developers the chance to adapt the plugins to meet specific needs. “With this decision, we wanted to transmit a very clear idea of our commitment to the open source principle,” Stefan Hamann said about making the final step toward being completely open source.

Additional gifts for the Community

In addition to eliminating ionCube encryption, Stefan Hamann presented another hugely beneficial gift for the Community: free subshop licences. As of Shopware 5.2, any number of subshops can be connected to one central backend. Previously, one subshop license cost 495 Euro.

When asked why Shopware gave so much to the Community, Stefan Hamann had a clear response: “We released our open source version in late 2010 – so for the past six years, we’ve been able to use the feedback and ideas from the Community as a compass to navigate the development of our platform. In order to remain accessible, we offer several open channels of communication: whether through the Issue Tracker, User Groups, Think Tanks or personal conversations at events. Because our company philosophy is based on reciprocity, we wanted to give something back to the Community, since they’ve been instrumental in Shopware’s ongoing progress.”

Keeping with the image of “Digital Ocean”, Shopware will continue to steer their ship along the open source path – a voyage which will inevitably lead to bringer eCommerce horizons. “We are confident that our open source strategy is the right way. Only when we work in close collaboration with our community can we reach the necessary innovative strength, flexibility and transparency that is so important for survival in our industry.”

Descartes Systems Group, the global leader in uniting logistics-intensive businesses in commerce, has announced that UK-headquartered Halfords, a leading automotive products and services retailer, is... END_OF_DOCUMENT_TOKEN_TO_BE_REPLACED