Running for Government…should it be a novel experience? 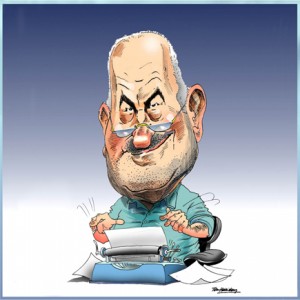 “It could be argued that the Government we have today, with a few notable exceptions,” says Graham Archer, “is composed of novice drivers you wouldn’t let loose around your house.”

You have to hand it to Oscar Wilde. He once described experience as “the word we use to explain our mistakes”.

When all else fails, experience is the thing that will help get us through. And as one old enough to have little else to offer, it’s a commodity in which my stock is increasing, year-by-year.

To illustrate my point, imagine that you are the person placed in charge of managing a large and busy warehouse. I’m thinking of one of those giant Distribution Centres – a place with more bays than the Norwegian coastline, into and out of which trucks roll like bees around a honey hive.

From morning to night, your task is to oversee the loading and unloading of every truck that backs its rear up to your building. Inside, like musicians in an orchestra, an army of fork truck drivers is at work, whizzing around, loading and unloading, without crashing, bashing or dropping.

But what happens when a few of them go sick…struck down by some dreaded bug only to leave you shorthanded, suddenly and without warning?

Assuming you don’t keep a subs bench, you’ll be left to fill the void as best you can. And one word will define the quality of help you will require. That word is ‘experience’. Because, as you don’t have time to explain to some novice how a fork truck works, a driver with experience is the only one that will satisfy your need.

And sure isn’t it the same in almost every walk of life?

But there is one occupation that many would argue is more important than all the others put together – yet it is one in which experience does not seem to be a qualifying requirement.

I’m thinking of Government – and those we appoint to it tasked with representing Ireland internationally and with managing the affairs of every man, woman and child in the country, born and not yet born.

Our present Government is a case in point. Amongst them are ministers who never held office previously. Yet, by virtue of their popularity, geographical location or loyalty to their leader, they are promoted into roles in which their responsibilities are hugely demanding and complex.

So long has it been since the current parties last held office, it could be argued that the Government we have today, with a few notable exceptions, is composed of novice drivers you would not let loose around your house.

By contrast, the former lot had experience to burn. Since the State was founded, they have seen government as their rightful role in life and the seat of a Mercedes-Benz as their natural home. Like fighting dogs, they believe that they were bred to be in Government.

Okay, so they didn’t always manage things as they should. But, the question is this: Would our lives have been better if we’d returned them back to office rather than hand the levers of power to a bunch of learner drivers?

It’s a question many of you may have considered these last few years. Metaphorically speaking, we need ministers who can whizz around, spinning and reversing, lifting and dropping, loading and unloading like the experts we would want them to be.

We don’t need a Government staffed with apprentices doing on-the-job training. So when next we ponder where our vote should go, should experience be our guiding principle? Should we pick the people who know what it’s like to sit behind a big desk giving orders or should we flirt with inexperience and throw our arms around those who would be kings?

Should we give youth its chance and risk them being appointed to roles far beyond their capability? The more I think about it, the more convinced I am: Never put an inexperienced person in charge of something which he or she does not have the capacity to handle.

Too often have we seen ‘Government by press release’ and watched policy being made on the hoof – policy that was badly conceived, ill advised and poorly thought through. Too often have ministers rushed at a gate when a more considered approach was required. Does Irish Water come to mind?

However loyal applicants might be, however popular the polls may say they are, when it comes to running the country, experimentation must be avoided. Right, Mary Lou?

Cruise ship gets extended Logistics lifeline for the Islands

Hermes UK, the leading consumer delivery company, has launched an innovative new service designed to further improve the ‘returns experience’ for its retail customers and their consumers. It... END_OF_DOCUMENT_TOKEN_TO_BE_REPLACED

Hermes UK, the leading consumer delivery company, has launched an innovative new service designed to further improve the ‘returns experience’ for its retail customers and their consumers. It follows a successful trial by fashion retailer, Joe Browns. The ‘What’s inside the box?” service... END_OF_DOCUMENT_TOKEN_TO_BE_REPLACED