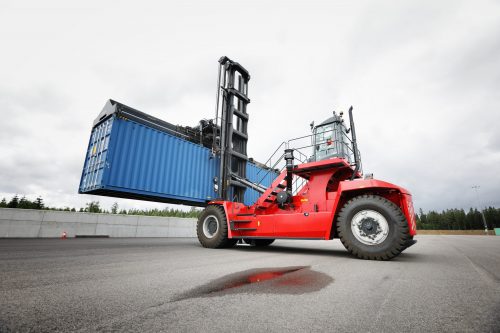 Top loaders are typically used in container terminals for moving loaded containers from trailers to a stack or vice versa and are the preferred choice where selectivity is a higher priority than high container density.

The G-Generation top loaders, which replace the previous F-Generation range, feature a variable hydraulic lifting system, which provides exactly the right amount of lifting power based on the weight of the load, meaning the driver does not have to rev the engine while lifting.

The new G-Generation top loader can also be delivered with Kalmar’s Eco Drive feature, which can cut fuel consumption and emissions by a further 15%. To minimise downtime, the new-generation machines have improved diagnostics, an optimised chassis and fewer moving parts and components. Maintenance is also quicker, easier and more cost-effective thanks to easily accessible service points and extended service intervals.

“The G-Generation top loader represents a significant advance in terms of driver ergonomics and productivity,” continues Malmström. “Customers can also benefit from increased safety through upgrade options such as a reverse warning system, tire pressure monitoring and additional lighting.”

Due to the high demand, the German robotics company Magazino extends its Europe-wide road tour into the first half of 2021. The tour provides interested companies in Belgium, Netherlands, Germany,... END_OF_DOCUMENT_TOKEN_TO_BE_REPLACED

Due to the high demand, the German robotics company Magazino extends its Europe-wide road tour into the first half of 2021. The tour provides interested companies in Belgium, Netherlands, Germany, Poland and the UK a product demonstration in their warehouse with the mobile picking robot TORU. New... END_OF_DOCUMENT_TOKEN_TO_BE_REPLACED