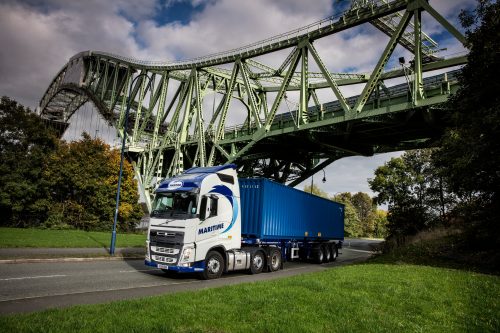 Maritime Transport Ltd. (Maritime) has confirmed its order of an additional five new Sany empty container handlers and five new Sany reach stackers supplied by Cooper Specialised Handling Ltd. (Cooper SH), as it looks to invest in machinery at its rail and container terminals and ensure an industry-leading service to its customers’ supply chains.

The direct purchase will see three second rail reach stackers stationed at Maritime’s new terminal currently under construction at East Midlands Gateway, due for completion in November, with two H9 reach stackers at its terminal in Tilbury. The five single and double empty container handlers will be distributed across Maritime’s other terminals, replacing some of its original fleet whilst adding to its new and existing operations; all machinery is expected to be fully operational later this year. This investment comes during Maritime’s expansion into the intermodal market and its increase in rail freight capacity, following the launch of its rail subdivision, Maritime Intermodal, announced in April this year.

Commenting on the new machinery, Tom Williams, Managing Director of Container Transport, stated: ‘This investment in new equipment will enable us to continue to provide the most advanced logistics solution, and truly reflects our ongoing commitment to upgrading our terminals and plant to support our growth and ambitions, and to meet our customers’ unique requirements. We look forward to working closely with Cooper SH to achieve this.’

Maritime’s partnership with Cooper SH commenced following its takeover of DHL Container Logistics back in 2010, which subsequently saw a new fleet of reach stackers, empty container handlers, and forklifts supplied to several of its depots across the UK.

‘We’re committed to ensuring Maritime has only the best equipment to operate at its depots, and are confident that these new container handlers will bring a whole host of benefits to further support its existing operation and increasing customer demand,’ said Chris Barnes, Sales Director at Cooper SH. ‘We’re delighted to be working with them as we both continue to see success.’

As part of the product launch process and to get customer feedback, the new Terberg fully electric Body Carrier was operated by Nap Transport at the DPD parcels site in Veenendaal in the Netherlands... END_OF_DOCUMENT_TOKEN_TO_BE_REPLACED

One of the most popular new items in BITO’s recently launched online BITO Direct catalogue is the company’s Galvanised Boltless Shelving, which can hold a combination of BITO’s XL and RK containers for bulk and small parts to suit the different purposes a company may have. The shelves can be... END_OF_DOCUMENT_TOKEN_TO_BE_REPLACED