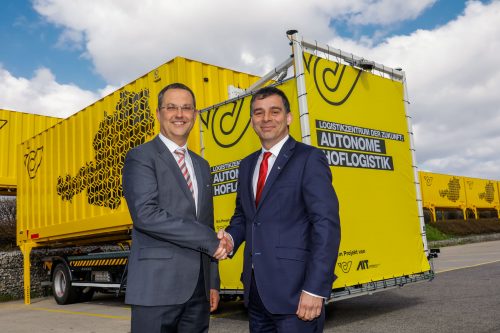 As an innovation leader, Austrian Post is driving forward the topic of “autonomous driving” and intelligent solutions in in-house logistics. While an automatic parcel unloading system was recently introduced, the successful use of drones and the delivery of parcels with an autonomous vehicle had previously been tested. The next step has now been taken with AIT: DI Peter Umundum, Member of the Management Board of Austrian Post, together with DI Arno Klamminger, Head of Center for Mobility Systems at AIT, presented an innovative vehicle for the autonomous transport of containers – also known as swap bodies – at Austrian Post’s logistics centre in Inzersdorf, Vienna.

AUTONOMOUS YARD LOGISTICS: MORE EFFICIENCY ON THE WORK PREMISES
The transfer vehicle, which has been specially developed for use at logistics locations, is intended to ensure the autonomous transport of swap bodies on the company premises. The swap bodies are thus transported independently from the designated parking spaces to the gates and docking to them is also automated.

“We believe in the future of autonomous driving, although it is difficult at the moment to identify test areas. With our project we have found the first real test area in in-house logistics that offers great potential for future feasibility,” says Peter Umundum, who underlines the importance of this topic for Austrian Post and draws a positive balance after the first results: “At our locations, a total of around 3,300 swap bodies are implemented every day, covering around 800 kilometres. Against the background of increasing parcel volumes and the associated personnel requirements, the relocation of swap bodies in logistics centres continues to gain in importance. We are looking for solutions to deal with these developments – driving forward innovations is one answer. The first tests have already shown what autonomous yard logistics can look like in the logistics centres of the future”.

New, modern technologies, which Austrian Post is developing with its in-house experts and partners, are intended to make day-to-day logistics not only more economical, but also more sustainable. “The AIT Austrian Institute of Technology has great expertise in the field of automated driving. For example, we are researching the effective and sustainable integration of automated vehicles in logistics applications. By means of a holistic approach, we support our partners in increasing effectiveness, efficiency and sustainability,” says Arno Klamminger about the promising project.

In the future, the transfer vehicle will be electrically powered with the aim to significantly reduce pollutant and noise emissions. At the same time, automation is driving forward digitization: From the order via “note and radiotelephony” to the plannable, digitized process. For the pilot project, a standard swap body pallet truck was converted. The findings from the tests in Inzersdorf, the largest logistics centre of Austrian Post, will be incorporated into further development work.

A video on autonomous driving can be found at post.at/hoflogistik.

Rushlift GSE, the specialist airport ground support equipment subsidiary of Doosan Industrial Vehicles UK, has won a £3.4 million contract to supply and maintain a fleet of 225 vehicles for ASC... END_OF_DOCUMENT_TOKEN_TO_BE_REPLACED