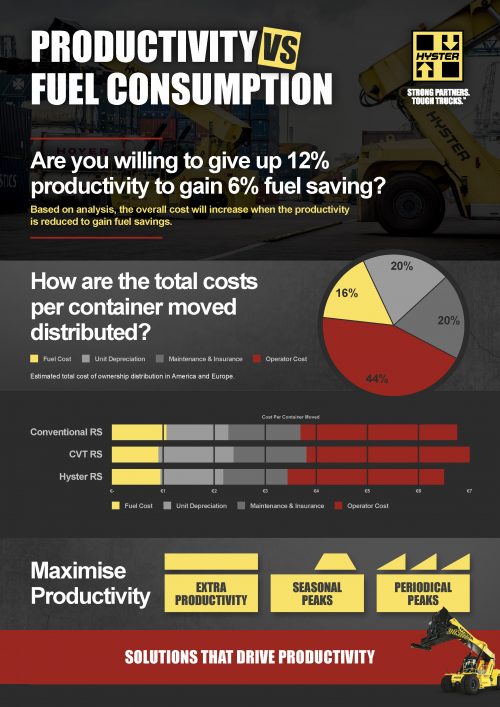 Hyster Europe has done extensive analysis using data from telematics which offers insight into ways to reduce the cost per tonne moved. The overall conclusion is that productivity has a greater impact on Total Cost of Operation (TCO) compared to minimising fuel consumption. While Hyster Container Handlers offer one of the lowest fuel consumption rates, this has been achieved without compromising productivity.

“Better productivity has a greater impact on the cost per container moved,” states Chris van de Werdt, Product Strategy Manager EMEA Big Trucks for Hyster Europe. “Fuel savings are good to have when they are not affecting productivity, as they are also a small percentage of the cost of running a machine.”

The company estimates that typically for the European and US market (excluding the tyre costs) just 17% of the total cost to run a ReachStacker, for example, is the fuel cost. 18% is maintenance costs, 20% is depreciation and a full 45% is operational costs, including the driver.

“Our approach to fuel savings has always been about the best balance to support busy operations,” says Chris. “Tests we have conducted indicated that the Hyster ReachStacker can be up to 12% more productive than a comparable product.”

“Real-life testing shows that 12% more containers can be moved per truck per hour in many operations, which quickly adds up. Excellent power response and productivity is often much better for operations with seasonal peaks and tight timescales when they need to push harder,” claims Chris.

“Hyster Europe offers fast, responsive machines that can help keep drivers fresh and productive,” he says. “Slow machines can lead to complaints, poor staff retention and an inefficient operation, despite marginal savings at the fuel pump.”

Hyster has always been at the forefront of fuel saving technologies particularly during the launch of its Stage IV Big Truck range.

“We were the first to bring huge fuel savings to the market, but we did not compromise on productivity,” he says. “As we launch our Stage V range, the fuel savings are significant, but the productivity is exceptional, making this the best balance for operations who want to make real financial savings.”

Many external factors affecting materials handling operations in the chemical supply chain are not immediately obvious. Mark Nailer, Industry Manager for Hyster Europe discusses some of the... END_OF_DOCUMENT_TOKEN_TO_BE_REPLACED

In the coldest and least populated region of Norway, CASE Construction Equipment customers fight the elements to keep the roads clear of snow. In the counties of Finnmark and Troms in the Arctic Circle, CASE G-series wheel loaders are starting work to keep the region moving through the winter... END_OF_DOCUMENT_TOKEN_TO_BE_REPLACED