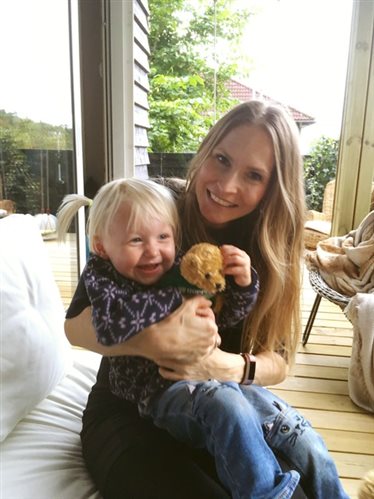 Hoppecke Industrial Batteries has brought a huge smile to the face of a two-year-old girl in Norway – and all in aid of mental health awareness.

Hoppecke – the leader in industrial battery systems and the largest battery manufacturer in European ownership – raised £1,000 for Mental Health Awareness Week at the Railtex show earlier in the year by asking visitors to make a voluntary donation in exchange for one of its famous bears.
The bears had been given a limited edition Railtex makeover and the original 300 branded bears proved so popular that another 100 standard bears had to be brought in to cope with demand! Monica Myhre-Sandmark from Wavetrain Systems AS in Norway saw the bears and wanted one for her daughter, who she said was less than pleased that her mother had gone to the UK to attend the show. Unfortunately, Monica never managed to get her hands on a bear before she flew home.
Hearing of her plight, Hoppecke arranged for two bears to be shipped to Monica who was delighted to receive them and said she would give a donation to support mental health awareness.
Monica said: “My little girl loves one bear so much that it is now called Basse (from the Norwegian ‘bamse’ meaning teddy). I will try to make her call it Hoppecke but she is not so good at talking yet, being only two! I will keep the other in the office to brighten things up!”
Jason Howlett, Hoppecke’s Regional Managing Director – Northern Europe, said: “People just couldn’t get enough of our bears at Railtex and we are delighted to have raised this money for such a worthy organisation as the Mental Health Foundation. I’m really glad that we could help Monica out and bring a smile to her daughter’s face.”

As part of the product launch process and to get customer feedback, the new Terberg fully electric Body Carrier was operated by Nap Transport at the DPD parcels site in Veenendaal in the Netherlands... END_OF_DOCUMENT_TOKEN_TO_BE_REPLACED

One of the most popular new items in BITO’s recently launched online BITO Direct catalogue is the company’s Galvanised Boltless Shelving, which can hold a combination of BITO’s XL and RK containers for bulk and small parts to suit the different purposes a company may have. The shelves can be... END_OF_DOCUMENT_TOKEN_TO_BE_REPLACED