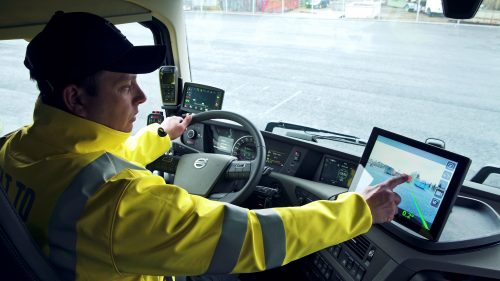 Hiab has launched its HiVision(TM) vision system for MULTILIFT hooklifts, to make hooklift operation easier, safer and quicker. HiVision creates an Augmented Reality experience by overlaying operation guidance and equipment information to real-life footage captured by rear cameras. The driver sees it on a touch-screen display inside the truck cabin that can also be used to operate the hooklift.

“We have combined our HiVision camera technology with the latest industry innovations to create HiVision for MULTILIFT. The new system offers the highest level of safety and control of all of our hooklifts. HiVision makes hooklift operation easier, safer and quicker, leading to less wear and tear of equipment, reducing the risk of accidents and increased productivity,” says Jan-Erik Lindfors, Vice President, New Business Solutions, Hiab.

A MULTILIFT with HiVision has three rear mounted cameras in different heights, so the driver gets full overview. The system can detect containers and with the push of a button the driver can select guidance to reverse and lift the desired container.

“In challenging environments HiVision makes hooklift operation easier as the system guides the driver to hook up the container at the first attempt. We are very pleased to bring this more intuitive operation to the market, as there has been a strong interest for this in focus groups,” says Jon Lopez, Vice President Demountables, Hiab.

HiVision adds another layer of safety, as the system shows the operator whether the container is loaded and secured correctly. It also warns about any static or on-coming obstacles so the driver can stop any operation that could otherwise lead to a dangerous situation.

Many external factors affecting materials handling operations in the chemical supply chain are not immediately obvious. Mark Nailer, Industry Manager for Hyster Europe discusses some of the... END_OF_DOCUMENT_TOKEN_TO_BE_REPLACED

In the coldest and least populated region of Norway, CASE Construction Equipment customers fight the elements to keep the roads clear of snow. In the counties of Finnmark and Troms in the Arctic Circle, CASE G-series wheel loaders are starting work to keep the region moving through the winter... END_OF_DOCUMENT_TOKEN_TO_BE_REPLACED