So we’re back to the horror story entitled “will Ryanair buy Aer Lingus?”

Well, here’s a few thoughts on airline travel to be going on with…

“If God had intended us to fly, he would have sent us tickets.”

“You know those oxygen masks on planes? I don’t think there’s really any oxygen there. I think they’re just to muffle the screams.”

“When I’m on a plane, I can never get my seat to recline more than a couple of centimetres. But the guy in front of me – his seat comes back far enough for me to do dental work on him.” 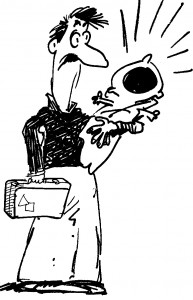 “Try flying on a plane with a baby and you’ll get a sense of what it must have been like to be a leper in the fourteenth century.”

“The scientific theory I like most is the one that says the rings of Saturn are composed entirely of lost airline luggage.”

“’As you exit the plane, make sure to gather all of your belongings. Please do not leave children or spouses…except for that gentleman over there.”

“People, people we’re not picking out furniture here, find a seat and get in it!”