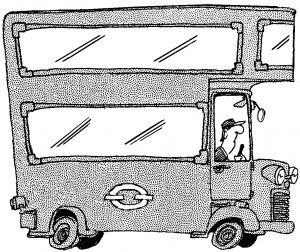 Tom arrived home very tipsy from the office Christmas party. His wife woke up: “You’re drunk. What time is it? How did you get home? You didn’t drive the car, I hope?”

“No, no. No, I took the bus. Joe told me that the police are getting really jumpy about drinkin’ and drivin’ this Christmas, so I decided to take the bus home. An’ just as well – we came to a road block an’ the police were breathalysing every single driver. ‘Course they waved the bus through on the outside lane…weren’t even delayed.”

“Haven’t a clue. Never driven’ one before. Not even sure where I got it from.”

HIGH-LEVEL SERVICE Your Health is your Wealth – if you can afford it!