The Dalai Lama said on his recent visit to Dublin: “The ultimate source of happiness, peace of mind, cannot be bought by money. Billionaires are very unhappy people.” Sounds about right, but you can still see the funny side…

They offered me a handshake of £10,000 to settle amicably. I told them they’d have to be a lot more amicable than that.

A casino is a place where you lose a hundred dollars in a slot machine and shrug your shoulders. Then you lose one dollar in the coke machine and you swear at it like crazy.

If you want to know what the Lord God thinks of money, you only have to look at the people he gives it to.

All I ask is for a chance to prove that money can’t make me happy.

The wretched thing about being rich is that you have to live with rich people. 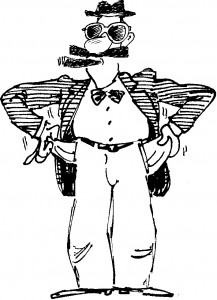 I started out with nothing. And I’ve still got most of it left.

Save a little money each month, and at the end of the year you’ll be surprised at how little you have.

When someone says it’s not the money, it’s the principle. It’s the money.

I once gave a waiter a tip. I told him never to step off a moving bus.

I was once so poor I didn’t know where my next husband was coming from.

The Big Turn-off… Van tyre defects on the rise