Now that it’s all over, with our Irish fans having won the Euros, we can all get back to what we were doing before it started…worrying about the Euro.

“The manager still has a fresh pair of legs up his sleeve.”

“Steve McCahill has limped off with a badly cut forehead.”

“I never comment on referees…and I’m not going to break the habit of a lifetime for that prat!”

“Well, either side could win…or it could be a draw.”

“I think the action replay shows it to be worse that it actually was.” 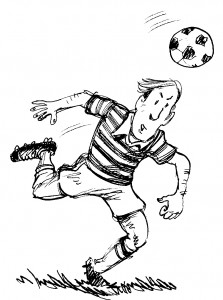 “Strangely, in slow-motion, the ball seemed to hang in the air for even longer.”

“Premier League football is a multi-million-pound industry with the aroma of a blocked toilet and the principles of a knocking shop.”

“If that had gone it would have been a goal.”

…David Coleman
“I never make predictions…and I never will.”

“I don’t believe it…you’ve a country full of sheep, and you’ve run out of bacon?”

…Paul Gascoigne, at breakfast in a New Zealand hotel.

The crowd thinks that Todd handled the ball – they must have seen something nobody else did.

PREMIA delivers the goods Dundalk-built MULTIHOG a hit in Paris

The Mercedes-Benz Global Logistics Center Germersheim is celebrating its 30th  anniversary this year and the inauguration of a new, state-of the-art warehouse complex. The After-Sales location began... END_OF_DOCUMENT_TOKEN_TO_BE_REPLACED