Now that Two-Mile Borris is on a fast track to becoming the Las Vegas of Western Europe, we though it was time we focussed on the brighter side of gambling. Like giving people the chance to gamble away everything they have in the world – but in really really nice surroundings. Right!?

If you give up gambling, drinking and sex, you don’t actually live longer – it just seems longer.

I went to the racetrack today. It was shut, so I pushed all my money through the gate.

I figure you have the same chance of winning the lottery whether you play or not. 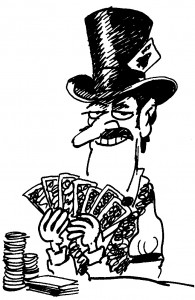 The urge to gamble is so universal and its practice so pleasurable, that I assume it must be evil.

Horse sense is something that every horse has. It prevents him betting on people.

The problem with people who have no vices is that you can be pretty sure they’ll have some pretty annoying virtues.

The quickest way to end up with a million in the musical theatre business is to start with two million.

According to statistics, it’s a lot easier to get hit by lightening than it is to win the lottery. But the good part of that is that you don’t hear from your relatives afterwards.