Seeing that, on page 41 of this issue Neal Sherman brought up the whole business of voting and elections, we thought we’d highlight a few words of wisdom on the topic…

One of these days the ‘don’t knows’ will get in, and then where will we be?

If voting changed anything, they’d abolish it.

Democracy is the theory that the common people know what they want – and deserve to get it good and hard.

We have always found the Irish a bit odd. They refuse to be English.
Winston Churchill 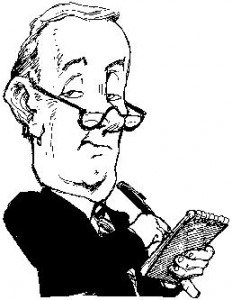 When someone says he agrees to a thing in principle, it means he hasn’t the slightest intention of carrying it out in practice.

We tried to set up a small anarchist community, but people just wouldn’t obey the rules.

Being criticised by Geoffrey Howe is like being savaged by a dead sheep.

Being in politics is like being a football coach. You have to be smart enough to understand the game, and dumb enough to think it’s important.

They say that in America anyone can become President. I’m beginning to believe it.

The BT Bottle Trick Vision of a New Era…or a Bargain Sell-off?

The Mercedes-Benz Global Logistics Center Germersheim is celebrating its 30th  anniversary this year and the inauguration of a new, state-of the-art warehouse complex. The After-Sales location began... END_OF_DOCUMENT_TOKEN_TO_BE_REPLACED

Combilift, the Monaghan based manufacturer of a wide range of handling solutions, first focussed its attention on the container sector in 2010 when it launched its Combi-SC Straddle Carrier range. It has since developed a number of variants of this economical and flexible alternative to other heavy... END_OF_DOCUMENT_TOKEN_TO_BE_REPLACED