Now that the broadcast media is gearing up for the London Olympics, perhaps it’s a good time to recall some famous sporting commentary observations…

“The Republic of China …back in the Olympics Games for the first time.”

“Britain’s last gold medal was a bronze in 1952 in Helsinki.”
Nigel Starmer-Smith

(Michael Holding of the West Indies bowling to Peter Willey of England, 1976)

“For those of you watching who don’t have television sets, live commentary is on Radio 2.”
Ted Lowe

“And now…the line-up for the final of the Women’s 400 metres Hurdle event …three Russians, two East Germans, a Pole, a Swede and a Frenchman.”
David Coleman 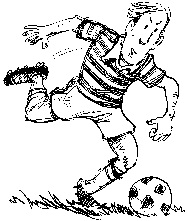 “I felt a lump in my mouth as the ball went in.”
Terry Venables

”Without doubt, one of the secrets of our successful season was the harmonium in the dressing room.”

“But as you know, the result for City is not as bad as it sounds on paper.”
Steve McIllwenn

“Gary Neville was the captain and now Ryan Giggs has taken on the mantelpiece.”
Rio Ferdinand

“That’s the fastest time ever run …but it’s not as fast as the world record!”

THE BLAME GAME …can we please change the rules? SPEED KILLS PROFITS