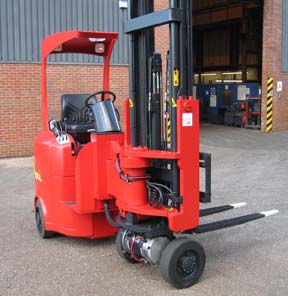 The new model, which can lift pallets to heights of up to 7.9 metres, is supplied as standard with treaded cushion rubber tyres for maximum traction in wet outdoor conditions, while twin front wheel drive means that the weight of the truck and the load is evenly divided between the front two tyres to further enhance traction and minimise tyre wear.

At the heart of the truck is a compact axle design which, combined with the Flexi EURO VNA’s ability to truly articulate through 220 degrees, allows easy stacking in 1,600m aisleways.

Instead of ‘pivot’ steering the Flexi EURO VNA is equipped with a ‘true articulation’ turning system, which means that the truck requires minimal manoeuvring in the aisleways. This in turn results in faster pallet put-away and picking, because in a 1,600mm wide aisle the truck needs only one articulation to put-away a standard ISO (or Chep-style) pallet. According to Flexi Narrow Aisle, comparative tests have shown that some three-wheel articulated trucks require up to four movements to achieve the same result.

“We believe that with its True Radius articulation principle, the Flexi EURO VNA can reduce the amount of movements that an operator has to make in the aisle during the stacking and de-stacking cycle by half,” said John Maguire, sales and marketing director of Flexi Narrow Aisle.

The Flexi EURO VNA retains many of the design features and uses the same proven component parts that feature on other models in the extensive Flexi range.

Peak-Ryzex – a provider of digital supply chain, mobile workforce and retail solutions – continues to support organisations operating in transport & logistics and the supply chain with a... END_OF_DOCUMENT_TOKEN_TO_BE_REPLACED

Peak-Ryzex – a provider of digital supply chain, mobile workforce and retail solutions – continues to support organisations operating in transport & logistics and the supply chain with a recent solution rolled out for two-man home delivery provider, Breezemount. With this new solution... END_OF_DOCUMENT_TOKEN_TO_BE_REPLACED