Finalists announced for the IFOY AWARD 2017 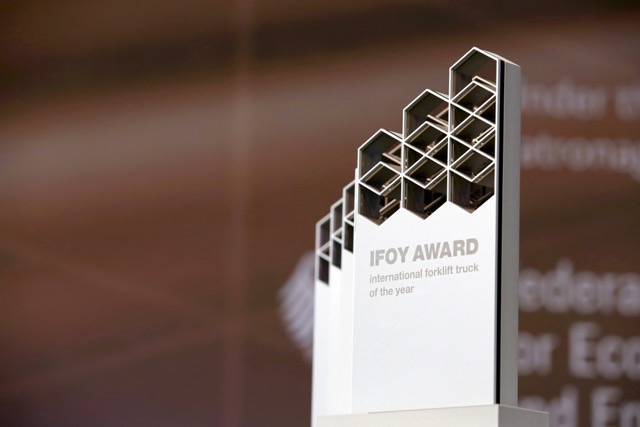 The finalists for the International Forklift Truck of the Year (IFOY) Award 2017 are in. Eleven trucks from Crown, Jungheinrich, kickTrike, SSI Schäfer, Still, Torwegge and UniCarriers have been nominated for the final round from all the entries.
“The keywords are electric, autonomous and customised, and intralogistics is the clear leader. The front-runners in the first round for the IFOY Award are the trendsetters and innovation pioneers in the new era of intralogistics”, says Anita Würmser, Chair of the IFOY Jury.
During the compulsory IFOY Test Days in March on the grounds of IFOY partner Messe München, all nominated vehicles will undergo rigorous trials in competitive testing sessions over the course of one week. The IFOY Test measures the hard data and compares it with the data for rival machines. The IFOY Innovation Check prepared by the specialists from the Dortmund-based Fraunhofer Institute for Material Flow and Logistics (IML) as well as the Chair of Machine Elements and Technical Logistics at the Helmut Schmidt University in Hamburg, focuses on innovations and the degree of innovation relative to the market. In addition, the jury members drive all nominated vehicles themselves, putting them through their paces during the IFOY Test Days.
Among other things, the IFOY Award assesses innovative quality, technology, design, ergonomics, handling, safety, cost effectiveness and sustainability.
Nominated in the category of “Warehouse Truck”: Jungheinrich, Still, UniCarriers
The jury has nominated three vehicles in the Warehouse Truck category. The first nominee for the final round and therefore also one of the candidates for the IFOY Test is the iGo neo CX 20, the world’s first autonomous horizontal order picker from Hamburg-based manufacturer Still. Only 80 cm wide and with a load capacity of 2,000 kg, the machine is equipped with a laser-assisted environment recognition system; it can be integrated in existing material flows or move as part of a platoon irrespective of the local conditions. The vehicle recognises and interprets the intentions of the operator and the operator’s movements. This makes the iGo neo CX 20 the first order picker with cognitive capability. The second nomination in this category goes to Jungheinrich for the world’s shortest universal forklift in its class – the Jungheinrich EMD 115i. With its Li-ion case weighing just 17 kilograms, it can be given a 50 percent charge at any 230-V power outlet in as little as 30 minutes, therefore rendering battery changes unnecessary. The electric high-lift stacker has been on the market since August 2016 and features several innovative details such as transparent mast covers. It can handle a wide range of simple stacking jobs up to heights of 1,520 mm as well as short transport distances with loads up to 1,500 kg, making it ideal for use in store outlets or extremely tight warehouse zones while also allowing easy loading onto a truck for transport to other locations.

The third forklift nomination is for the brand new EPH 125 DTFV from UniCarriers. The new flagship machine from the Swedish manufacturer only came onto the market two months ago and was developed to perform order-picking tasks outside aisles as well as for high lifting heights in rail or wire-guided aisles. With its powerful 48-Volt AC motor and a load centre of 600, the EPH has a lifting capacity of 1,250 kg and really comes into its own in heavy-duty operations and at extreme heights of up to 12.1 metres. One innovative detail is the fold-back mast, which greatly facilitates delivery of the machine.
Nominations for “Special Vehicle” from Crown, kickTrike and Still
There are also three nominations by the Jury for the Special Vehicle category. The first nomination is for the WAV 60 from Crown, introduced in May 2016. The multifunctional machine has its place where ladders are normally used – in narrow and highly frequented environments in the retail sector or production zones, for example. The “electric ladder” reaches speeds of up to 8 kmh, can drive and lift simultaneously, and achieves grab heights up to five metres.
The second nomination goes to start-up kickTrike for its electric transporter of the same name. The first intralogistics eBike came onto the market in November 2016 and transports everything weighing up to 170 kilograms with the exception of pallets. The kickTrike reaches speeds of 25 kmh, is foldable and permits battery change in the space of 20 seconds. The fun factor is an integral part of the concept, which is designed to ensure intuitive operation and enhanced efficiency.
A further nominee is a tugger train with automatic loading and unloading of oversized load carriers measuring up to 1,200 x 2,400 millimetres, a special design developed by Hamburg-based manufacturer Still. On behalf of a gearbox manufacturer in the UK, Still developed a new LiftRunner C-frame with two electrically driven telescopic fork pairs, each with a load capacity of up to 1,000 kg. The automated tugger train replaces two front-loading forklifts.

Nominated in the “Automated Guided Vehicle” category: SSI Schäfer and Torwegge
Together with cooperation partner Identytec, SSI Schäfer also earns a nomination with its Automated Driverless Delivery (ADD) concept for fully automatic replenishment control using autonomous guided vehicles (AGVs). The ADD system comprises a 2Stack AGV which – in combination with auto ID technology and a software-based eKanban – creates a fully self-contained control loop for big and small load carriers used in production and warehouse logistics.
The second nomination was won by Torwegge for its modular TORsten “drive-under” AGV. Only 210 mm high, the AGV uses different platforms to transport all the standard industrial load carriers and individual components with weights of up to seven tons. TORsten navigates autonomously through its operating zone and plans its own routes using a 2D layout of the surrounding space. The most conspicuous feature of TORsten is the omnidirectional drive concept from the SEW Eurodrive stable – which permits not only motion in the narrowest of spaces but also rotation about its own axis.
“Special of the Year” finalists: Jungheinrich, Still, UniCarriers
The Jury has announced three nominations in this year’s “Special of the Year” category. The award recognises a specific component or technical detail. Jungheinrich won its place in the final round with its intelligent system for the easy localisation of trucks within the warehouse. The Jungheinrich indoor truck finder can generate both live and retrospective position-based reports and analysis of all stacker movements. Each truck is equipped with a smartphone that works together with multiple beacons installed throughout the warehouse to compute the position of the truck and send the corresponding data directly to a server.
Still claims its third nomination this year with its self-cooling PowerPlusLife battery. Conventional lead acid batteries soon “hit the wall” when performing heavy-duty tasks or operating in three-shift mode. It is sometimes not possible to ensure adequate cooling cycles even with one or two replacement batteries. The patented reduction in operating temperature by up to 20 degrees significantly boosts performance and extends battery life by up to two years even in the toughest of operating environments.
UniCarriers has been rewarded with a further nomination for its ergonomic alternative to the dead man’s feature, the DPS (driver presence sensor). To ensure operator safety, order pickers are fitted with a dead man’s device. However, operators subconsciously exert more pressure via the foot that activates the switch, leading to one-sided strain – particularly on-board order-picking stackers with wide working platform. UniCarriers has developed a system in which the dead man’s switch is replaced by a floor panel that is equipped with sensors over its full area.
The winner in each category will be chosen by a jury made up of 25 internationally reputed trade journalists and the leading logistics media from 16 countries around the globe. The IFOY Award will be presented on the opening evening of the leading logistics fair transport logistic in the BMW Welt, in Munich.

As part of the product launch process and to get customer feedback, the new Terberg fully electric Body Carrier was operated by Nap Transport at the DPD parcels site in Veenendaal in the Netherlands... END_OF_DOCUMENT_TOKEN_TO_BE_REPLACED

One of the most popular new items in BITO’s recently launched online BITO Direct catalogue is the company’s Galvanised Boltless Shelving, which can hold a combination of BITO’s XL and RK containers for bulk and small parts to suit the different purposes a company may have. The shelves can be... END_OF_DOCUMENT_TOKEN_TO_BE_REPLACED