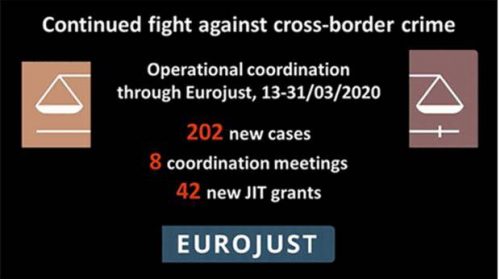 While Europe and other parts of the world are coping with the coronavirus crisis and its consequences, criminals continue to pursue their illegal activities. Some of them are even expanding their heinous business by ruthlessly taking advantage of the current situation. In these challenging times, Eurojust, the EU Agency for Criminal Justice Cooperation, remains fully operational and continues its support for national authorities in the fight against serious cross-border crime.
In the beginning of March, a number of business continuity measures were swiftly activated to ensure the Agency’s services also in a situation of remote working. Eurojust quickly adapted its infrastructure and critical processes to ensure that its laptops could provide secure access to the case management system, as well as advanced videoconferencing, including interpretation via secured channels.

In the period 13 – 31 March 2020:
· 202 new cases were opened by National Members of Eurojust, each case initiating cooperation among countries involved in a specific investigation of serious cross-border crime. This is only a slight decrease compared to the number of cases registered from 1 to 12 March (261), when the Eurojust building was still fully accessible;
· eight coordination meetings took place, one at Eurojust premises and the other seven via secure videoconferencing. Another four coordination meetings through videoconferencing are scheduled to take place in the next two weeks;
· Eurojust’s coordination centre was deployed remotely to support a joint action day;
· 42 new grants for joint investigation teams were awarded by Eurojust to national authorities on 27 March 2020 for a total amount of EUR 470 000; ; and
· agreements for two new joint investigation teams have been signed.

Ladislav Hamran, the President of Eurojust, said: “While we are in the middle of a global health crisis, Eurojust is committed to ensure that also in these extraordinary times, we do not allow criminals to escape justice. In the past weeks, we have continued to bring prosecutors from all over the EU together in a virtual way.
This reinforces our belief that the fight against cross-border organised crime calls for a profound digitalisation of the way we work, bridging any distance by using secure connections for videoconferencing and data exchange. Justice needs to be done under all circumstances.”
Background:
Prosecutors and investigative judges tackling serious cross-border crime need to quickly find the right counterpart, coordinate their investigations, efficiently exchange information and solve a range of practical issues that regularly arise when using EU judicial cooperation tools, including the European Arrest Warrant (EAW) and the European Investigation Order (EIO).
Eurojust is a hub where national judicial authorities connect, work closely together and ensure solid judicial follow-up throughout the internal security chain, from the very start of the cross-border criminal investigation to the final verdict in court. Throughout the different stages of the investigation, Eurojust therefore offers tailor-made operational support:
· A rapid response, sometimes completed within a matter of hours, including connecting with key counterparts and preparation of formal judicial cooperation requests, including official translations.
· Complex forms of assistance and coordination mechanisms, which may be combined as required to support major operations:
o the identification of key counterparts that need to be involved, for example to coordinate parallel investigations;
o the organisation of case-specific coordination meetings;
o the formation of joint investigation teams (JITs); and
o the planning of joint action days, steered in real time from the coordination centre at Eurojust.
· In 2019, nearly 8 000 criminal investigations of many forms of serious cross-border crime, including drugs smuggling, cybercrime, trafficking in human beings, theft, migrant smuggling, terrorism and many forms of economic crime, including money laundering, fraud and environmental crime, were facilitated through Eurojust.

Hermes UK, the leading consumer delivery company, has launched an innovative new service designed to further improve the ‘returns experience’ for its retail customers and their consumers. It... END_OF_DOCUMENT_TOKEN_TO_BE_REPLACED

Hermes UK, the leading consumer delivery company, has launched an innovative new service designed to further improve the ‘returns experience’ for its retail customers and their consumers. It follows a successful trial by fashion retailer, Joe Browns. The ‘What’s inside the box?” service... END_OF_DOCUMENT_TOKEN_TO_BE_REPLACED