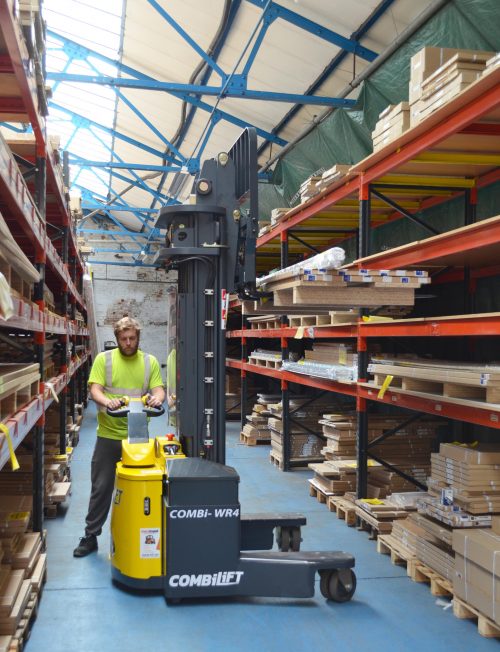 Since Crown Imperial was established as Crown Products in 1946, the company’s portfolio over the decades has included wooden toys, nursery furniture, contract furniture for the government and even ice cream advertising stands. The family run business now specialises in the manufacture of high quality British furniture for kitchens, bedrooms and living areas. It has a large showroom with 6,000 products in Daventry, but its headquarters are in Herne Bay. This is where it has recently overhauled and enhanced handling procedures by bringing in a number of Combilift models to replace counterbalance and reach trucks that were previously used.

The wide variety of raw materials and the varying dimensions of finished products that need to be moved around and stored at the 10,000m² production facility required versatile equipment, and Store Manager Bruce Whiting was also keen to reduce the level of ride-on forklift traffic, particularly in areas where a lot of other personnel are present. Taking advice from Jon Collett of materials handling consultants Mexmast, he looked at the Combilift range and found the ideal solution in the form of Combi-WR4 multidirectional pedestrian stackers and a Combi-CBE4 multidirectional counterbalance design forklift.

Crown Imperial is the first company in the UK to take delivery of the new 4t capacity electric powered Combi-CB – which ticked all the boxes for Bruce. “We wanted a truck with a small footprint that could work in narrow confines, but we also needed enough capacity to cope with our heavier loads. Electric power was also essential for lower running costs, so we were pleased to hear that Combilift had recently added the CBE4 to its range.”

The CBE4 is used across the site for a wide range of tasks; offloading 6m long packs of timber, chipboard and MDF and taking them to racking, and handling long profiles and timber doors. It can also attach a tipping bin to the forks which is used to take chipping waste to the wood burner for recycling (which provides fuel for heating the facility). The compact size of the truck coupled with its 4-way ability enables it to easily manoeuvre the tipper between machinery in the main hall without affecting production schedules.

The two Combi-WR4s, which have a capacity of 1,450kg, tend to work inside, although they are equally at home outside if required. They handle lighter loads such the long profiles, pallets of components such as drawer runners, as well as the large amount of cardboard that is used for packaging. A major feature of all Combilift’s walk behind trucks is the unique patented multi-position tiller arm which enables push button rotation of the rear wheel parallel to the chassis and back. This offers excellent visibility of the surroundings, the forks and the load, and when working in narrow aisles it enables the operator to stand at the side of the unit rather than the rear, avoiding any crush risk. The lower speed of pedestrian machines compared to ride-on trucks also fits neatly with Crown Imperial’s requirement for ultra-safe operation, particularly when manouevering around corners or potential blind spots.

The versatility and 4-way capability of the Combilifts have enabled better use of storage space for long products and have also brought further benefits, as Bruce points out. “Thanks to the Combi-WR4’s manouevrability in the small aisles of the warehouse area we can put stock where we couldn’t previously and can now store all elements of a customer order in one place. With the old reach trucks we had to split orders and keep them in different locations. So it is now much quicker to locate a specific order, and if customers want to delay shipment there is no issue for us with lack of space.”

“Our previous handling suppliers were not overly helpful to be honest,” said Bruce, “so we were very open to Jon’s fresh take on our operation and impressed with his suggestions and Mexmast’s  service which have improved efficiency. He also recommended the blue spot safety light, which indicates the direction of travel of the Combi-CB to further reduce risks, as well as the Hoppecke trak® air rapid charging battery system, so we can top up quickly in a break if we think we’re going to need extra power. And the drivers/operators love them – which is of course very important.”

“We pride ourselves on our advanced manufacturing equipment with which we can process timber and MDF at speed of 30 panels a minute, or drill 1 million holes a day, and our handling equipment is now equally sophisticated. We are able to do things that were impossible before from a handling, storage and safety point of view and new possibilities for better utilisation of space and equipment keep occurring to us.”

As part of the product launch process and to get customer feedback, the new Terberg fully electric Body Carrier was operated by Nap Transport at the DPD parcels site in Veenendaal in the Netherlands... END_OF_DOCUMENT_TOKEN_TO_BE_REPLACED

As part of the product launch process and to get customer feedback, the new Terberg fully electric Body Carrier was operated by Nap Transport at the DPD parcels site in Veenendaal in the Netherlands for several months early in 2020. Director Arjan Nap: “We were very pleased with the electric... END_OF_DOCUMENT_TOKEN_TO_BE_REPLACED