Delivering the milk with JCB! 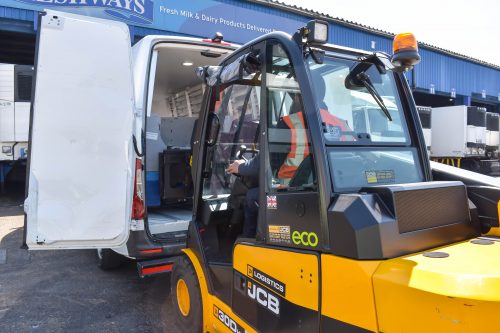 Freshways is the UK’s largest independent processing dairy and provides wholesalers, manufacturers and other businesses such as cafes, hotels, retailers and bakeries with milk and cream products together with a wide range of own-label and branded food including bread, yogurt, fruit juices, cheeses, and eggs.

The company produces and distributes some 6 million litres of milk per week from its processing facility in Acton, West London and operates additional retail distribution sites in Leeds, Manchester, Derby, Coventry, Cardiff, Birmingham and Plympton in Devon.

The company’s Acton site operates around-the-clock, seven-days-a-week. Raw milk arrives at the facility from UK farms in insulated tankers and is emptied into a number of storage silos before undergoing processing and bottling. Once filled, PET containers or flexible ‘pouches’ are delivered from the bottling line to the adjacent cold store where they are held prior to onward delivery to Freshways’ clients.

Palletised loads destined for Freshways’ various UK-wide distribution sites are put into waiting refrigerated trailers, while a fleet of over 100 Mercedes Sprinter vans is used to deliver orders directly from the Acton site to retailers across London and the south east of England.

Freshways service some of the biggest purveyors of coffee in the UK and, typically, the Sprinters leave the Acton site destined for coffee shops loaded with two plastic transport containers – or ‘clappers’ as they are known – filled with ‘pouches’ of milk.

Historically, Freshways has relied upon a fleet of counterbalanced forklift trucks to load the vans with full containers and unload the empty ones that come back to the Acton site using the van’s side and rear doors.

However, the loading and unloading process was resulting in unacceptably frequent damage to the Mercedes van fleet so an alternative handling method was sought.

Alex McDougall says: “We were recording high incidents of damage to the vans’ ‘T-bar’, bulk head and floor. We attributed this to the difficulty our lift truck operators were having when loading the first of the ‘clappers’ through the side door and the impact caused when the second container was loaded through the rear doors and pushed into the first unit.”

Safety was also a concern. Alex McDougall says: “It is not unusual for a coffee store to return all or part of their order due to order amendments, so vans returning to Acton with product on-board have to be unloaded. Retrieving a full or semi-full container from a van involves applying a strap to the container which allows it to be pulled out – either manually or by lift truck. The need to add the strap brings an element of manual handling that we are keen to avoid.”

The JCB Teletruk differs from a conventional counterbalanced forklift in a number of ways but the most obvious is in its use of a telescopic boom mast in place of the standard lift truck’s vertical lift mast configuration.

The Teletruk’s unique telescopic mast design gives a forward reach of 2.4 metres, which allows the Teletruk to deliver a pallet or container to the far end of a delivery vehicle without touching the floor or sides of the vans, until the pallet is gently lowered in to position. In this way, the Teletruk greatly reduces the risk of load and vehicle damage and, of course, cuts the likelihood of injury associated with manually handling loads in to vehicles.

Freshways experienced an immediate and significant drop in vehicle damage during the trial of the JCB Teletruk, while the exposure of warehouse staff to the risk of manual handling injury was also significantly reduced.

In addition, throughput speeds at the site improved noticeably, as Alex McDougall, explains: “The ability to load and unload our van fleet using only the vehicles’ rear doors has speeded up the goods-out and container returns process. When it comes to unloading containers, the Teletruk’s boom mast allows both ‘clappers’ to be removed from the van without the need to apply a shackle strap to the container at the far end of the van as had previously been required.”

Following the success of the trial, Freshways has taken delivery of a diesel powered Teletruk from the JCB Logistics range which has been supplied by Hiremech on a five-year service and maintenance contract.

Paul Murray, JCB’s Teletruk general manager, says: “As Freshways have realised, one of the most common causes of lost van ‘up time’ is not an engine fault deriving from poor maintenance or damage resulting from reckless driving: it is bodywork damage inflicted by poor load handling and loading techniques.

“In simple terms, when it comes to van loading it is common practice for a small counterbalanced truck or pallet truck to be used to lift a palletized load into the back of a vehicle. The pallet is then often ‘slid’ into the van’s storage space either manually or using the forks of the lift truck.

“But, as many fleet operators have found to their cost, there is a significant likelihood that a container or other palletized load that is slid into the back of a van will often cause significant damage to the vehicle.

“More and more logistics operators and courier firms are eliminating this problem by introducing JCB’s Teletruk technology to their operations.”

Hermes UK, the leading consumer delivery company, has launched an innovative new service designed to further improve the ‘returns experience’ for its retail customers and their consumers. It... END_OF_DOCUMENT_TOKEN_TO_BE_REPLACED

Hermes UK, the leading consumer delivery company, has launched an innovative new service designed to further improve the ‘returns experience’ for its retail customers and their consumers. It follows a successful trial by fashion retailer, Joe Browns. The ‘What’s inside the box?” service... END_OF_DOCUMENT_TOKEN_TO_BE_REPLACED