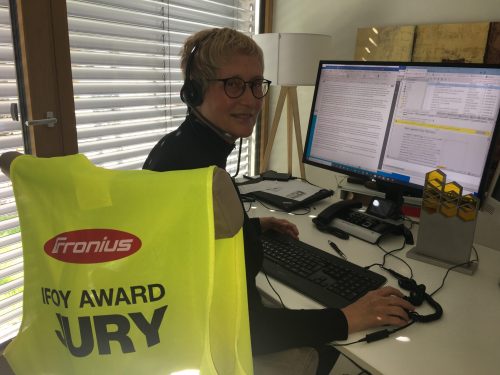 Ismaning, March 23, 2020: People all over the world are currently experiencing the same shutdown – just a little different. In my calendar there was at least one business event a week until the end of May. In fact, my own test event, the IFOY TEST DAYS with the TEST CAMP Intralogistics in Hanover, actually was the last intralogistics event that took place in Germany. Those who can or have to work in the home office these days, which by the way works surprisingly well because less time is wasted in useless meetings or in traffic jams. Hours of meetings and miles of traffic jams used to be typically German in the past.

Nowadays people spend their time with hoarding. The supply angst is growing and the food retailers probably make more sales than during Christmas business. Besides toilet paper, Germans like to hoard noodles, rice, canned ravioli (which, by the way, nobody else would eat voluntarily because they taste awful), rubber gloves, flour, toothpaste, hand soap, foot cream(?) and detergent. Disinfectants and masks are long out anyway. The overcrowded shopping carts and supermarkets already show that the supply situation is still secure – apart from toilet paper, which from a psychological point of view seems to have become a symbol of security. Which is really embarrassing. The CEO of the German drugstore chain dm was recently pilloried in the media for having sugar coated the supply situation of toilet paper. Camera teams have been sent out to report live from the toilet paper front. I was so ashamed for the Germans.

Many here say that Europe has completely failed. Except for freight traffic, the borders to our European neighbours have now been closed, which stops less the virus than the supply chains. Last week, some of the trucks jammed 90 kilometres backwards the borders. Anyway, logistics is suddenly important. “Supply chains” are on everyone’s lips and appear in every headline. This is why the government has lifted or significantly eased almost all restrictions on freight transport, from truck driving bans to night flying restrictions and driving or rest periods. Just a few weeks ago, logistics centres were unwelcome, today they are in more demand than ever.

As long as production continues, logistics can deliver, say the most important logistics associations BIEK, BGL and DSLV, which have become the real voice of the industry these days. However, nobody knows how long production will continue. Some supply chains are already at the end because they are running out of parts. The automobile factories, mechanical engineering and many other production plants in Germany are gradually coming to a complete stop. Passenger flights are cancelled, cargo flights are fully booked. Air freight rates for textiles from China to Germany are said to have already increased by a factor of five. Craftsmen are still working, and public life is also still running quite reasonably well.

Since yesterday, strict exit restrictions are in place nationwide in Germany. Only supermarkets, pharmacies, post offices and food-to-go-restaurants are still open. It is allowed to drive to work, do the most necessary shopping, jog alone and go for a walk with your partner or family. Only holding a minimum distance of 1.5 metres does not really work. Those who stick to it are sabotaged by those who squeeze through the gap and think it’s good that finally nobody stands in their way. It is a touching experience for all Germans to see how solidary the people in Italy are, singing on the balconies to thank all those who keep public life going. We simply adopted this from Italy, even if we Germans are not as passionate in this as our Italian neighbours.

By the way, everyone is suddenly happy that a completely unpretentious and methodical Angela Merkel is German Chancellor and not some shooting-mad media clowns. It was probably thanks to her that the government immediately launched billion-euro packages for the economy to help companies survive the crisis and make a new beginning.

The Germans have long been refusing to take note of the inevitable. Now they realize that this is only the beginning and that everything will change in the next two years. As I know my fellow countrymen, they will plan this very accurately.  “German Efficiency” is what an IFOY jury colleague once called it, Angela Merkel would say “Wir schaffen das!” (We´ll make it)

Anita Würmser is a journalist and Managing Jury Chairwoman of the international logistics awards Logistics Hall of Fame and IFOY AWARD (International Intralogistics and Forklift Truck of the Year).

As part of the product launch process and to get customer feedback, the new Terberg fully electric Body Carrier was operated by Nap Transport at the DPD parcels site in Veenendaal in the Netherlands... END_OF_DOCUMENT_TOKEN_TO_BE_REPLACED

As part of the product launch process and to get customer feedback, the new Terberg fully electric Body Carrier was operated by Nap Transport at the DPD parcels site in Veenendaal in the Netherlands for several months early in 2020. Director Arjan Nap: “We were very pleased with the electric... END_OF_DOCUMENT_TOKEN_TO_BE_REPLACED