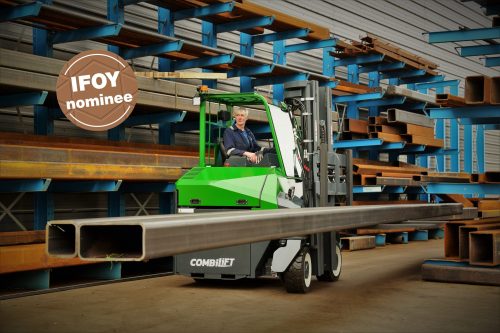 For the second year in a row Combilift is a finalist in the IFOY Awards – one of the most prestigious and hotly contested international awards in the materials handling industry. The company is the only manufacturer to have two of its products nominated for a 2020 IFOY Award (International Intralogistics & Forklift Truck of the Year) which honours the best products and solutions of the year.

The Combi-CBE4 is a finalist in the Special Vehicle Category. This 4000kg capacity electric powered, all-wheel drive forklift incorporates compact counterbalance design with multidirectional capability for the versatile handling of mixed sized loads. It features the company’s internationally patented independent electric traction (EP.2956350) which provides all front and rear drive wheels with 100% traction control, therefore negating the need for differential lock on slippery surfaces. By inputting the wheel-base parameters, the traction commands are calculated by the control system. As the truck drives and steers, the speed and rotational direction of the wheels are controlled independently, allowing the truck to negotiate tight turns with no tyre wear.

The Combi-CS has been nominated in the Warehouse Truck Lowlifter Category. It is the only pedestrian counterbalance stacker that will operate in a conventional reach truck aisle for space saving and productive storage and handling. It features Combilift’s unique, internationally patented and award winning multi-position tiller arm which can be turned to the left or right of the unit to position the rear drive wheel, allowing the operator to remain at the side of the machine rather than at the rear as is the case with other pedestrian stackers. This ensures optimum visibility of the load and surroundings as well as guaranteeing maximum safety in areas where other personnel or members of the public may be present.

The competition will enter its next round when finalists undergo the IFOY audit and innovation check by industry experts in mid-February in Hanover, Germany. 27 journalists from leading logistics media from 19 countries will also personally test and evaluate the nominated equipment for qualities such as technology, design, ergonomics, safety, marketability, customer benefit and sustainability.

“Following the nomination of the Combi-PPT powered pallet truck last year, we are delighted that the IFOY committee has recognised two of our innovative products as being worthy of finalist status in 2020,” said Combilift CEO and Co-founder Martin McVicar. 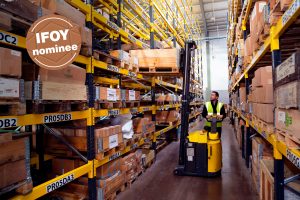