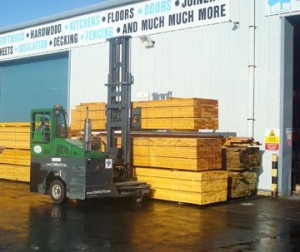 MGM Timber has taken delivery of six Monaghan-built Combilift 4-way forklifts, which will be used to improve the handling and storage procedures of the company’s wide range of forest products – such as structural and aesthetic timbers, sheet materials, joinery, decking and flooring products as well as a wide range of insulation and plasterboard products.

Eight of the company’s twelve branches are now equipped with Combilift trucks. Part of the James Donaldson Group of companies, MGM Timber was established in 1991 and has grown to become Scotland’s largest independent timber merchant with sales of £30m in 2009/10.

MGM had previously needed a combination of sideloaders and counterbalance forklifts to cope with its varying sizes of loads ranging from palletised goods to 6m long packs of timber. The Combilift’s ability to work as a sideloader as well as a conventional truck plus its 4-way capability eliminates the need for multiple machines. Operations are speeded up as drivers no longer need to switch from one truck to another for specific tasks, and the number of forklift movements are reduced for enhanced health and safety procedures.

Diesel powered C4000 Combilifts as well as modified versions of the model were chosen as being most suitable for MGM’s requirements. The C4000’s 4-tonne capacity and ability to work in narrow aisles as well as on semi-rough terrain make it a versatile workhorse for a wide variety of applications.

Combilift won numerous awards for its products since the company was established in 1998. Designed and built in Monaghan, the current range encompasses at least fifteen base models with capacities ranging from 2.5-25 tonnes. There are now around 11,000 units in operation around the world.

Peak-Ryzex – a provider of digital supply chain, mobile workforce and retail solutions – continues to support organisations operating in transport & logistics and the supply chain with a... END_OF_DOCUMENT_TOKEN_TO_BE_REPLACED

Peak-Ryzex – a provider of digital supply chain, mobile workforce and retail solutions – continues to support organisations operating in transport & logistics and the supply chain with a recent solution rolled out for two-man home delivery provider, Breezemount. With this new solution... END_OF_DOCUMENT_TOKEN_TO_BE_REPLACED