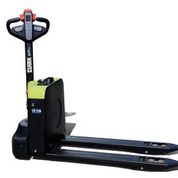 Following the market launch of the pedestrian low-lift pallet truck WPio20 and the PPXsio20 low-lift pallet truck with folding driver’s platform, Clark is now presenting two further electric low-lift trucks with Li-Ion technology and load capacities of 1,500 and 1,800kg with the WPio15 and WPio18.
The materials handling vehiclesmanufacturer thus has a complete series of low-lift trucks with load capacities of 1.2 to 2tons.
The models of the WPio series are designed for efficient goods transport over short distances in distributioncenters, production or warehouses. All vehicles are equipped with the durable and powerful Li-Ion battery. This makes them reliable helpers in industry, trade and logistics. With the help of purely electric lifting and lowering, the operator can move heavy loads ergonomically and efficiently without much physical effort. The compact vehicles also score points for their maneuverability. Especially in confined spaces, such as in storage areas or sales rooms, and also on ramps, they prove their ability due to theirgood climbing ability.Versatile and efficientThe WPio15 has a maximum load capacity of 1,500kg. The versatile low-lift truck is equipped with a 24Volt (30Ah) Li-Ion battery and transports light loads reliably and safely at a maximum speed of 4.5km/h. The user-friendly tiller arm can be operated intuitively by both right-and left-handed operators. To ensure safety in application, the vehicle brakes automatically when the tiller is released. Optimally adjusted lateral support rollers improve stability when cornering. With an L2 dimension of only 400mm and a turning radius of 1,390mm, the WPio15 is compactly built and ideally suited for use in confined spaces and for carrying on trucks.
The weight of this flexible storage assistant is only 160kg including battery.The WPio18 is equipped with a 48Volt (20Ah) Li-Ion battery, making it the powerful all-rounder of this series. With a maximum load capacity of 1,800kg and a driving speed of 5km/h, the truckis ideally suited for transporting medium-heavy loads. The WPIo18also brakes automatically when the tiller is released. Its L2 dimensions and turning radius correspond to the values of the WPio15 –with a tare weight of 170kg including battery. This means that this vehicle is also compact and ideal for confined spaces and for carrying on the truck. The ergonomic tiller with its easy-grip positioning of the controls is suitable for both right-and left-handed operators. The Smart Display integrated in the tiller provides information about important driving parameters, such as battery level, operating hours, driving program, display of error codes and battery management. The truckis started via Smart Key to protect the vehicle from unauthorized access.Together with the WPio20 low-lift pallet truck with a load capacity of 2,000kg, which is designed for tougher applications, Clark now offers its customers a complete low-lift pallet truck series for a wide range of applications. Extensive additional equipment is available so that customers can adapt the trucks to their specific application. With the help of these and Li-Iontechnology, efficiency in use can be significantly increased and operating costs reduced.Li-Ion power ensures high availability and low operating costs The WPioseries and the Li-Ion technology offer many advantages to the operator: The high energy density of the battery enables high driving performance and availability. Intermediate charges, for example during breaks, can be used to extend operating times without limiting service life.
The user can choose between two battery charging variants. Using the internal 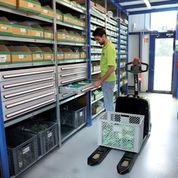 charger, the vehicle can be connected to any 230Volt socket to charge the battery using the plug on the charger. The second battery charging variant, inthe form of optional handy exchangeable batteries weighing only 10 or 14kg, ensures longer service life, for example in multi-shift operation. The exchange battery can be replaced by the empty battery in the vehicle with a single movement. The operatoralso benefits from numerous advantages that have a positive effect on operating costs: Compared to the block battery, the Li-ion battery has a longer service life. There is no additional effort for maintenance work around the battery acid, as the Li-ion battery is maintenance-free. Intermediate charges can be carried out without a special charging compartment, and the charging location does not need to be ventilated as with lead-acid batteries, since no gassing o ccurs.4,573characters including spaces

Due to the high demand, the German robotics company Magazino extends its Europe-wide road tour into the first half of 2021. The tour provides interested companies in Belgium, Netherlands, Germany,... END_OF_DOCUMENT_TOKEN_TO_BE_REPLACED

Due to the high demand, the German robotics company Magazino extends its Europe-wide road tour into the first half of 2021. The tour provides interested companies in Belgium, Netherlands, Germany, Poland and the UK a product demonstration in their warehouse with the mobile picking robot TORU. New... END_OF_DOCUMENT_TOKEN_TO_BE_REPLACED