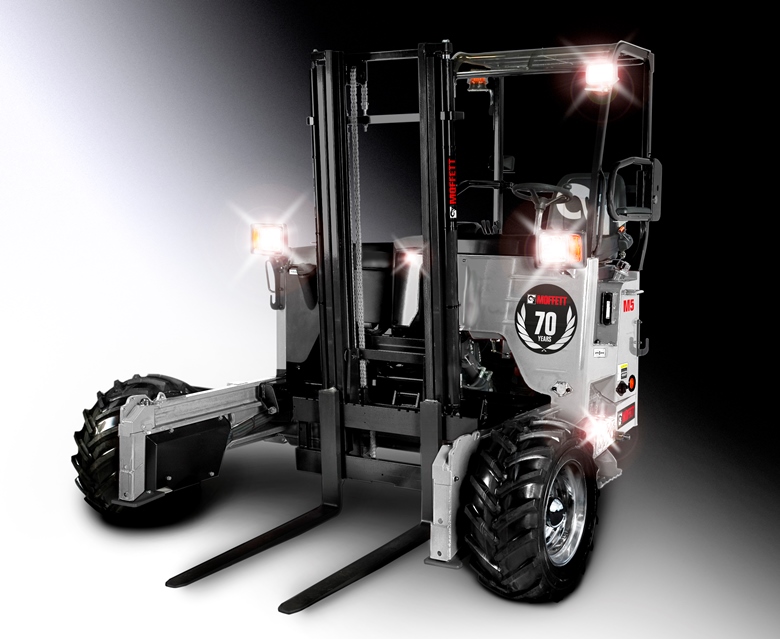 MOFFETT, part of Cargotec’s Hiab business area, is delighted to announce that CCF Limited, part of Travis Perkins plc, is the winner of its 70th anniversary charity auction.

CCF placed the winning bid of €53,000 for the privilege of owning a unique, tailor-made, anniversary edition MOFFETT truck mounted forklift. MOFFETT will donate all of the money raised from the winning bid to charity.

On behalf of CCF, Graham Bellman, Group Fleet Director, Travis Perkins plc, said: “We have worked with Hiab for many years, and the idea of supporting one of our partnership suppliers in such a worthy cause was something we wanted to get involved with. To provide the winning bid has been good, as this will help support many needy causes, and also cements the relationship we have with MOFFETT and Hiab.”

CCF is one of the UK’s leading distributors of interior building products to professionals within the construction industry. It is a part of Travis Perkins plc, who has been supplying building materials to the UK’s construction industry for over 200 years. For more than 20 years, Hiab has been supplying Travis Perkins plc with truck-mounted forklifts, tail lifts, and loader cranes.

“The anniversary machine will be a one-off,” added Bellman. “We hope to use it on one of our latest trucks that will go into London to support a scheme designed to improve safety with vulnerable road users. Our truck and the MOFFETT will be attending a number of events to promote safe and efficient road operations, something that MOFFETT is also keen to promote.”

Travis Perkins plc is renowned for its involvement in fundraising for UK charities, and has raised over £10 million (€13.4million) to date. It gets actively involved in supporting the local communities close to where its businesses are based.

“We are incredibly proud of our work for UK charities and our commitment to local projects, however, the scale of this scheme is something that, as a business, we could not have achieved worldwide. We are delighted to have been able to support Hiab’s work in supporting worldwide charities,” said Bellman.

The finalists of the MOFFETT World Championship 2015, to be held on October 23-24 at the MOFFETT factory in Dundalk, Ireland, will each choose a charity to receive a share of the money raised in the auction. A share will also be given to Travis Perkin’s chosen charity, Wizz Kidz, which works to set disabled children free to reach their true potential and live their lives to the full.

“It was fantastic to see the amount of support and number of bids we received for this special edition anniversary machine,” says Keith Quigley, Senior Vice President, Truck Mounted Forklifts, Hiab. “I am delighted that our longtime customer was successful with their winning bid of €53,000 and that the World Championship finalists have nominated so many good causes that will benefit in the countries where we do business.”

Bellman concluded: “MOFFETT has led the way in innovation for truck mounted forklifts, and has become the name synonymous with quality and excellent service support. They’ve also been a leading light in giving to worldwide causes, so we’re proud to be associated with them.”

The Mercedes-Benz Global Logistics Center Germersheim is celebrating its 30th  anniversary this year and the inauguration of a new, state-of the-art warehouse complex. The After-Sales location began... END_OF_DOCUMENT_TOKEN_TO_BE_REPLACED