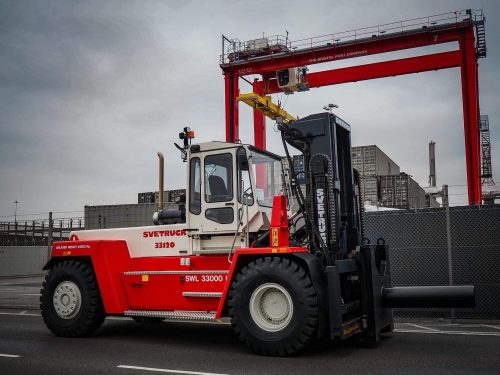 To truly understand the importance of The Bristol Port Company’s latest purchase, we first must understand the history that ties both companies together.

In the very early 90’s entrepreneur’s Sir David Ord and Terence Mordaunt went out to market for small to medium size forklifts to support their recent acquisition of The Bristol Port Company from Bristol Council.  At the time this was the first major investment in plant equipment for the pair, and to date they have invested over £475 million ensuring The Bristol Port Company is one of the UK’s most diverse and efficient Ports.

To match the long-term business aspirations, The Bristol Port Company chose SveTruck, which at the time were little unknown in the UK, however their reputation proceeded them in Scandinavian home markets where asset life and machine strength are the key barometers for success.

The first order of 27 units were delivered in fresh red and white SveTruck livery which latterly was adopted by The Bristol Port Company for their corporate colours which can be witnessed everywhere on site.

At the time of the order, Sweden was in deep recession, interest rates were at an all-time high with major production facilities closing their doors every day never to reopen.

With the size of The Bristol Port Company order, SveTruck were not only able to navigate the recession which would surely see them close their doors but carried this out without making a single redundancy to its staff, quite simply an incredible stroke of fortune and timing.

Never has the importance of The Bristol Port Company order been forgotten by the SveTruck family and when the words “Bristol Port” are spoken in the Ljungby production facility, everybody stops to listen.

So, after nearly a 20-year gap, why did Bristol choose SveTruck again?

Well we could write the story of SveTruck latest D5 technology and fleet management systems, however whilst nice additions to their forklifts, this was not the driving reason.

Quite simply, The Bristol Port Company know that SveTruck will last the test of time in any application and when you need your assets to perform consistently over a 20-year period, there is only one manufacturer that can achieve this.

Chris Barnes, Cooper SH Sales Director said: ‘They know in trusting SveTruck, that the drivers have the safest cabin in the market, their engineers have a machine that is simple for maintenance and cost efficient, along with spare parts back-up that are produced in house.’  Chris added: ‘They are acutely aware that SveTruck design will not evolve for the sake of evolving, yes subtle changes such as engine technology progression, but the key fundamentals that Bristol Port identified in the 90’s remain in design today and for future production.’

Lucy Ellis, Development Engineer at The Bristol Port Company commented, “We are happy to receive our new SVE 33 tonne forklift truck from Cooper Handling.  We know SveTruck very well and understand the long-term robustness of the product.  After a recent factory visit to Ljungby to see the in-house production, it is no surprise that the large majority of our original purchase are very reliably performing, some 20 years later.  This is a solid investment for the Port and further proof to our customers that we choose market leading equipment to provide speed of response, reliability and great flexibility for our customers.”

As part of the product launch process and to get customer feedback, the new Terberg fully electric Body Carrier was operated by Nap Transport at the DPD parcels site in Veenendaal in the Netherlands... END_OF_DOCUMENT_TOKEN_TO_BE_REPLACED

As part of the product launch process and to get customer feedback, the new Terberg fully electric Body Carrier was operated by Nap Transport at the DPD parcels site in Veenendaal in the Netherlands for several months early in 2020. Director Arjan Nap: “We were very pleased with the electric... END_OF_DOCUMENT_TOKEN_TO_BE_REPLACED