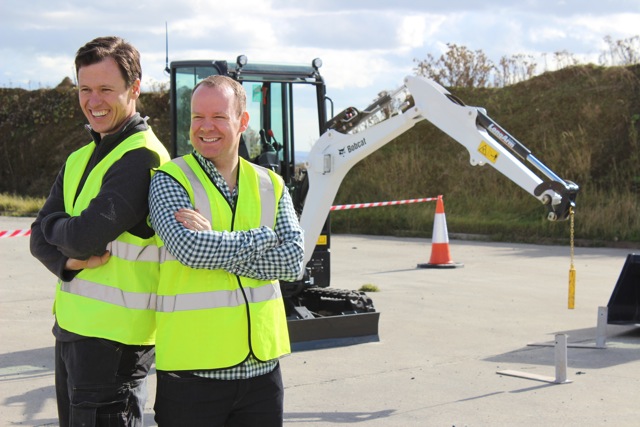 Waterloo, Belgium – A team from Boyzone, one of the most successful boy bands in Ireland and the UK, has been declared winner of the Republic‘s first ‘Bobcat Challenge’ for charity. In the Bobcat Challenge, held in aid of the Finn’s First Steps and Irish Autism Action charities, the Boyzone team of Shane Lynch and Keith Duffy, with over 25 million records sold worldwide, took on a team from Today FM, Ireland‘s biggest radio station, comprising DJs Anton Savage and Neil Delamare, for the honour of winning funds for the charity of their choice.

The Bobcat Challenge was organised jointly by Today FM and Limerick-based Adare Machinery, an Authorised Dealer for the Bobcat and Doosan Heavy ranges in Ireland. The idea for the event followed a visit made by Anton Savage to the very impressive Adare Machinery stand at Ireland’s 2015 National Ploughing Championships held in September and Today FM wants to make this an annual event. Though the Boyzone team eventually won the day, donations from Adare Machinery and Bobcat ensured there were no losers with both charities receiving 1000 euros for their worthy causes.

William Cuddy of Adare Machinery said: “I think that Anton was inspired by the Bobcat and Doosan machines we had working on our biggest ever stand at the National Ploughing Championships and we are delighted to have been able to help in putting on the first ever Bobcat Challenge.

“The event was a huge success, with Anton making numerous references to it during his own show on Today FM (daily listenership 212,000 people) over the course of the week. Not only that, he dedicated a full 15 minutes summarising and praising the event to his listeners the day after the Bobcat Challenge itself. The video of the event on YouTube is called Today FM Vs Boyzone in the BOBCAT CHALLENGE and it has already had well over 2000 views on Youtube alone.”

Challenge 1B: Mini-Digger Challenge – Using the bucket and clamp, pick up 3 x footballs and drop them into a container

Challenge 2: Skid-steer Loader Challenge – Move the skid-steer loader through a series of obstacles and then around a course

Challenge 3: Team Challenge – Using the skid-steer loader collect 3 tyres and drive through a series of cones and drop tyres for teammate.

William Cuddy added: “I’d like to say a special thanks to everyone who made this event possible, especially Alastair Jones and Tomas Mrkvicka from Bobcat who were able to attend on the day and provided expert advice and help and Paul Arthur who organised the charity donation from Bobcat.”

For the Bobcat range, Adare Machinery is the Authorised Dealer for the whole of Ireland. As an Authorised Dealer for Doosan Construction Equipment, Adare Machinery has exclusivity for sales and service in Munster and Connacht for Doosan crawler and wheeled excavators from 3 to 53 tonne and the Doosan range of wheel loader models with bucket capacities from 1.9 to 4.8 m3.

Operating out of state-of-the-art premises at Patrickswell near the city of Limerick, Adare Machinery is also offering service and warranty work on all existing Doosan and Bobcat machines in its area, backed by a full selection of genuine accessories and parts.

The Mercedes-Benz Global Logistics Center Germersheim is celebrating its 30th  anniversary this year and the inauguration of a new, state-of the-art warehouse complex. The After-Sales location began... END_OF_DOCUMENT_TOKEN_TO_BE_REPLACED