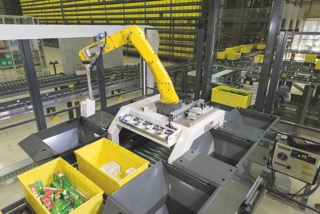 At the recent LogiMAT 2017 exhibition in Stuttgart, Knapp was honoured with the Best Product Award.

With warehouse staff reaching their performance limits in processes that demand high performance and quality for long periods of time, one solution is the use of industrial robots. Achieving reliable robotic picking had been considered an insurmountable task but KNAPP’s Pick-it-Easy Robot has made this a reality. Its Pick-it-Easy Robot picks articles from the source container and transfers them to the target container.

Designed to handle a wide range of articles in applications where consistently high throughput is required, KNAPP’s Pick-it-Easy Robot is a goods-to person picking system that is suitable for various business sectors and sales channels. Robotic and manual workstations can be easily combined to make best possible use of their individual assets. The robot cell offers particular advantages to companies with multi-shift operation that are striving to reduce errors and the associated costs.

Sophisticated image recognition and processing software detects the target article in the source container and calculates the optimal grip point on the article’s surface. The six-axis articulated arm robot positions the gripper precisely over the grip point, with the flexible gripper able to pick articles lying in any position in the source container. Constantly monitored by sensors, the system picks up the article and transfers it safely into the target container. The Pick-it-Easy Robot complies with all safety standards and guidelines.

In continuous use, the Pick-it-Easy Robot attains a significant increase in productivity, while maintaining consistently high quality in comparison to manual picking. An ideally designed goods-to-person workstation can process 1000 lines per hour; over a longer period, however, such performance is not possible for the human workforce. Depending on order structure, article range and capacity peaks, a robot cell can replace one or more manual workstations. If, for example, a manual workstation with two-shift operation is replaced, the payback period for the Pick-it-Easy Robot is very short.

KNAPP’s zero defect warehouse philosophy, based on modern image processing and recognition technologies, has been incorporated in the development of the Pick-it-Easy Robot. The work process is monitored by several sensor systems, with any errors being detected and corrected automatically or, if necessary, forwarded to a manual workstation. The cost of errors is considerably reduced and delivery quality is enhanced.