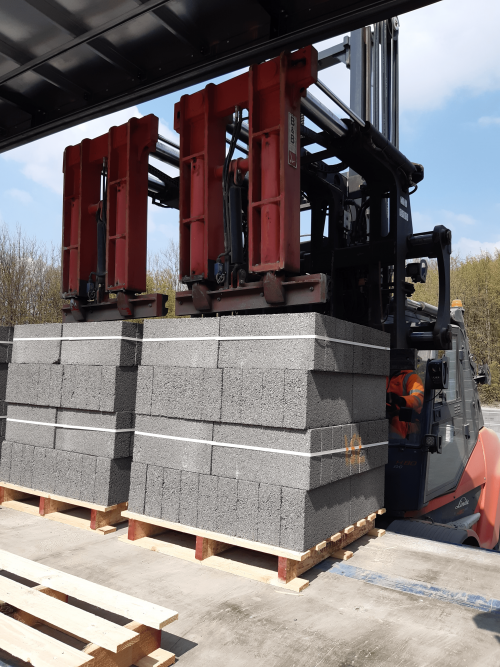 Aggregate Industries manufactures and supplies a range of heavy building materials, primarily aggregates such as stone, asphalt and concrete, to the construction industry and other business sectors. With over 200 sites and around 3,700 dedicated employees, Aggregate Industries supply products to help businesses work sustainably, safely, professionally, and profitably.
The Concrete Products Division at Aggregate Industries based in Callow, Cheddar, identified there was a requirement to standardise the most efficient loading method across the fleet, irrespective of trailer type, while maintaining safety expectations.
Aggregate Industries building block sites had traditionally used a forklift fitted with a pivot style overhead clamp attachment to load packs of concrete building blocks onto flat beds and crane lorries. However, there is insufficient clearance between the top of some block packs and standard curtain sided trailer roofs to lift the clamp clear, preventing direct loading of curtain sided trailers. As a result, Aggregate Industries Concrete Block Factories had been using a far less efficient and time-consuming process which involved placing its block packs on to pallets and then loading by a conventional forklift. This loading method was more than double that of flat and crane vehicles loading times and associated costs, plus created a reluctance to take advantage of additional payload and potential backhaul loads that the network fleet of curtain sided trailers offered, and have a premium cost for use, as there is little scope for back haul of other goods.
It became necessary to find a solution to prevent double handling of loads, ensuring that the load travels straight from the yard storage to the curtain sided vehicle.
Neil Spratt, Aggregates Industries Regional Operations Manager approached B&B Attachments with a proposed forklift clamp concept that would create space to enable the twin clamp to lift clear of block packs after they had been loaded onto a curtain sided trailer.
B&B Attachments is the leading specialist in material handling solutions in the UK and Ireland. The company designs, manufactures, and supplies forklift truck attachment solutions. Its design department converted the concept into reality.
Following numerous meetings, a prototype TK45-TEL clamp was manufactured. This model would not only work as a standard twin consolidating overhead block clamp, but also have the added key benefit of being able to load packs directly onto curtain sided vehicles. As the TK45-TEL had an additional leg retraction selection. Considerable time was spent to eliminate potential incorrect function selection by forklift operators. This added safety innovation allows its hydraulic system to work independently for each clamp, enabling the operator to clamp, load, and withdraw easily and safely when loading a curtain sided vehicle.
The B&B Attachments BlockMaster TK45-TEL is a new, first-of-its kind innovation. “The clamp preforms all the other duties expected of a twin consolidating clamp. The retractable legs and hydraulics control interlocks in this new attachment, provides efficient direct loading of concrete products efficiently on to curtain sided vehicles. It also opens the door to exciting haulage efficiency opportunities previously not pursued.” Comments Richard Smith, Business Improvement Manager at Aggregate Industries.

CKF Systems are delighted to have been awarded a licence to manufacture Intralox ARB technology in recognition of the in-house expertise and knowledge of the team in the state-of-the-art CKF facility... END_OF_DOCUMENT_TOKEN_TO_BE_REPLACED