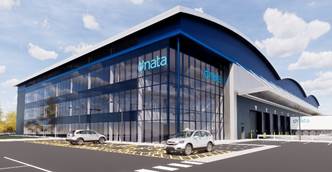 The proposed new facility at dnata City East has – like its counterpart – been specifically designed to accommodate the operational requirements of dnata (the largest independent cargo-handler serving Heathrow), and its client, Virgin/Delta. The two dnata City East buildings together will double the size of the airlines’ joint cargo operations at Heathrow.

Like its counterpart, the proposed new facility will incorporate the latest carbon reduction initiatives In both its design and operation in line with AIPUT’s Carbon Strategy to future-proof the use and value of the facility – including the use of solar PV panels, air-source heat pumps and electric vehicle charging – targeting a BREEAM ‘Very Good’ rating as a minimum.

Nick Smith, Fund Manager for AIPUT, owners of the site, said: “This pre-let supports AIPUT’s long-term vision to grow our high-quality air cargo portfolio at Heathrow. Our successful partnership with dnata at dnata City East sets a new benchmark for airport industrial property investment, in terms both of its unprecedented scale and the industry-leading environmental credentials of the buildings.

“Our proposed new warehouse is set to further reinforce the status of this critically important logistics destination as the most significant off-airport cargo-handling operation at Heathrow.”

dnata UK CEO, Gary Morgan, added: “We are thrilled to enhance our operations in the UK by committing to another state-of-the-art facility in London Heathrow. Our final phase of dnata City East builds on the multi-million pound investments we have made at the airport in the last five years, cementing our position as a leading cargo services provider in the country. We continue to invest in advanced infrastructure and cutting-edge technologies to deliver the best possible services for our customers.”